"Only in Jerusalem" Bus Story

The picture illustrating this story doesn't show any faces or easily identifying whatevers, but I need a photo for each blog post. 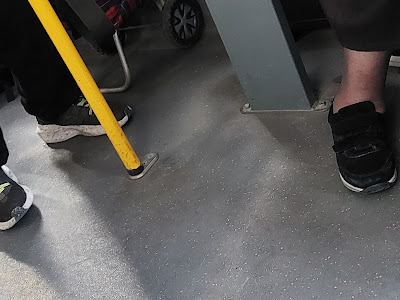 This afternoon I was on the #34 bus from Hadar Mall to Jaffa Street to catch the lightrail to make my bus home, which never showed, but that's irrelevant to the story*...

The bus was full but not super crowded. I was sitting near the front with my back to the driver. We were around the Keren Hayesod Street stop when I heard someone saying that "two seats were needed near the front." I saw people escorting a couple of blind men into the bus. Across from me was a man about ten years or more my junior and a girl who looked about 14. I told the girl that she must give up her seat. She looked a bit confused but got up, as did the man sitting next to her.

Other passengers helped guide the two blindmen to the seats. Then a message was passed from the driver, asking which stop they'd be getting off.

Across the aisle, a woman who was probably a bit older than me began a "silent conversation" with me just using our eyes. It was obvious that she thought the young teen should have realized that she needed to get up without my having to say something. It's very probable that the girl had never been taught proper "travel manners." Nowadays when so many families have cars, kids don't know that the front seats are for elderly and handicapped and that they are sometimes supposed to give up seats for those in need.

A couple of months ago on a different bus a woman got up for me, and then she squeezed in with her children. A stop or two later, an elderly couple came in, so the woman and her children gave them their seats. These children are learning proper public transportation manners.

I got off the bus before the blindmen, but I have no doubt that they were carefully and politely helped off the bus. Some days there's a bonus to traveling on public transportation in Jerusalem.

Is this an "Only in Israel" story?

*Although I was overjoyed that I got to the bus stop on time for my bus, the bus never showed, and I had to get home a more complicated way.

Email ThisBlogThis!Share to TwitterShare to FacebookShare to Pinterest
Labels: handicapped, Jerusalem, manners, only in Israel, only in Jerusalem, Public Transportation, real life

I'm someplace in this video. I've watched it many times even in slow motion and can't really find myself. My sister also danced in the NCSY group which I had led. I can't find her either, though she should be easy to find. She's relatively short. Ours is the Wedding Dance with the bride.
The NCSY National Conference of Synagogue Youth was the youth organization that changed my life. By attending its events in the middle 1960s I became familiar with Torah Judaism. I don't like the term "orthodox."
In 1967 I danced in the NCSY group when it was led by the legendary Leah Weiner, Z"L, May Her Memory Be a Blessing. In 1968 we didn't have a group, (Leah didn't head the group then) though we danced in the Salute to Israel Parade. Look at the picture on the right. The parade organizers used the picture of me and my friend for the advertisement for the following year's parade.
After the disappointment in 1968 that we hadn't danced in the Israeli Folk Dance Festival headed by Fred Berk, I made it clear to NCSY that I'd be taking over the dance group. There was no way that we'd miss another festival.
In 1969 we danced a "Shabbat Candle-lighting Dance." My choreography was considered "horrendous," so the head choreographer put something together for us, and I had the "whip" the girls/dancers into performance shape. I guess I'm a better leader than choreographer, since we surprised them with a well-danced performance. We had been warned that if we weren't up to par, we wouldn't participate in the festival. We were also given tips for costumes and props. I may have sewn all the skirts, which we used again the following year. Possibly others helped with the sewing.
Now for Israeli Dance Festival 1970--
After my experience the previous year, I had decided not to dance with the group. It's very hard to make sure lines are straight and everyone's movements are coordinated when dancing with everyone. And again the head choreographer redid the dance.
I didn't mind not dancing the "dance," because I'd still be dancing the in the finale. For the very first time, Fred Berk had the type of stage he had always been dreaming of. There wouldn't be a theatrical stage with curtains. Fred had always said that folk dance includes and entrance and exit. He envisioned a large area where the dancers would wait together, each group rising and entering when it was their turn. This was able to happen in Felt Forum- Madison Square Garden a huge indoor sports stadium in midtown Manhattan. And since there was enough room, we were to end with all the groups dancing together. You'll see that in the film.
Back to the NCSY group. Somehow we ended up with one too many dancers, but thankfully, two didn't mind only dancing in one performance, rather than both afternoon and evening. And I found it much easier to lead the group to "perfection" when not dancing with them. Being that this was my third festival and second time leading, I was confident that we'd do a great job.
But... the morning of the performance when we arrived for the one and only dress rehearsal... I discovered that two of my dancers weren't there. They were both out sick. One had a bad flu and the other being checked for possible appendicitis. Okay... yes... and how did we solve that problem?
Even though I had never danced the dance, only supervised, I found myself having to dance. And even scarier, I had to lead a line, so it was hard to cheat and follow the others. But somehow I pulled it off. One of the sick ones felt better by evening performance and participated then. So I don't know if I'm in the dance part of the movie; though I was in the finale for sure.
That's the behind the scene story of the NCSY Dance Group 1970.
Posted by Batya at 3/10/2022 09:40:00 PM No comments: