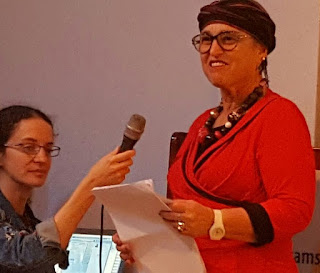 Who's Baile Rochel, you may be wondering.  Well, she's me.  That's the "Jewish name" I was given as a baby.  Besides being called Baile in Oakland Jewish Center, Bayside, NY, Hebrew School, I've never used the name in public.  When I became a Zionist in Betar, I called myself Batya, the name a substitute Hebrew School teacher suggested as more suitable for "Beth" than Baile.

A few years after we moved to Shiloh, I found this comic "voice" and named her "Baile Rochel."  My Baile Rochel column was a popular feature in Counterpoint, a pro-Jews in YESHA newspaper which was edited by Rachel Katzman and my husband, Yisrael Medad.

I was known as the "Erma Bombeck of Judea/Samaria."