Fish Meal in the "Shuk"

During the "Nine Days," those traditional days of mourning the destruction of the Holy Temples, many Jews do not eat meat or poultry. It was davka that week when I went out with one of my children for dinner. She recommended a fish restaurant in Jerusalem's Machane Yehuda Open Market. I've eaten in a couple of the meat restaurants, but hadn't tried the fish one.

מכמורת Michmoret, just a minute's walk from Agripas Street, 4 Hatute Street, offers a meal very similar to the ones you can get in the meat places. They start with salads and bread, and then you get the meal/fish of your choice with either cooked vegetables or french fries.   There was a nice selection of fish. I took my usual salmon and also ordered beer.

Everything seems to be cooked to order and nicely presented.

You can sit inside, outside or at the bar.

The biggest challenge is the stairs to the WC, so if you need easily accessible restrooms, it may not be your spot; though there may be some nearby.

I was extra lucky to discover an electric outlet next to my seat for recharging my phone. And our table for two just inside was comfortably quiet enough for us to talk. Considering that the market transforms into a busy night spot after dark, we were afraid that we would suffer from the noise. We were pleasantly surprised at how nice it was.

It's strictly kosher and open Sunday to Thursday 12-24.00, Friday 12-16.00. Our meal for two including a large beer and glass of wine cost NS200, which is considered very reasonable. Of course without the drinks it would have been much less. And being in the shuk there is lots of buses and the lightrail to get there. We enjoyed ourselves and recommend it.
Posted by Batya at 7/31/2015 07:35:00 AM No comments:

Me, The Beer Maven?

The other night I again joined Doug, of  Israel Brews and Views, and his panel of beer mavens in a beer tasting event, this time to judge the best Israeli made amber beer.


I must admit that not all of them were good, as you can see from this picture of me trying to figure out which was the worst of the seven we had to taste.


Ever since I have reached my rather exalted age, I've made a point of sitting in the first seats on the bus, which in Israel are reserved for the "elderly and handicapped" when they aren't occupied.

One of my favorite things is to look out from the large clear front window, especially since in our "protected" buses, the side passengers windows are quite often so scratched up all you see is grey. There are bus drivers who are very friendly, and those who are the opposite. Talking to nearby passengers helps them stay awake.

Last night, the young woman in the seat opposite me was very busy talking to the driver. It was obvious that they knew each other in real life by her using his name and referring to his family. Suddenly I realized that his replies to her weren't verbal. He was "signing." And she was replying to his rapid and expressive hand movements.


"Could the bus driver be deaf?" I wondered.

She barely stopped talking for a second, and he had no way to lip read. He couldn't be deaf I realized. My mind began to imagine possible causes. Had he been somehow injured, shot in the face in a way to prevent easy speech? Or could the cause of this need to sign be from a congenital problem? My mind was racing. But, I remembered, he had answer passengers who had asked about the route and fare. Suddenly, soon before I reached my stop, he began to respond to her verbally.

Mushroom and Vegetable Soup, Easy to Make and Delicious 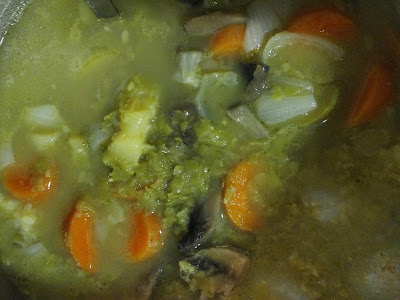 It was so delicious that my husband even complimented me on it. And it really was easy to make.

Ingredients, no need to measure:

If you had pre-cooked the peas, then the soup will be ready in about 45 minutes, otherwise it will take at least an hour or more. Don't serve it immediately after turning off the heat. The soup will finish cooking from its own heat, so take that into account. I sometimes cover the pot with a heavy towel after the flame is turned off to make sure it's really cooked well.

For this week, 52 Frames gave a very subjective, vague and unstructured challenge/theme, "Unusual." Like many in the ever-growing group, I was stumped. I decided to go go out of my comfort zone, which had been our instructions a different week and try something new  or not usually done, another one of the themes and play with the photoshop program,  IrfanView, on my computer.

But first I needed a photograph. While walking around the neighborhood took pictures of stone walls and stairs which looked interesting. And then I saw a bush over a stone wall. I took the picture, but when I got home and checked it on the computer it looked so dark. 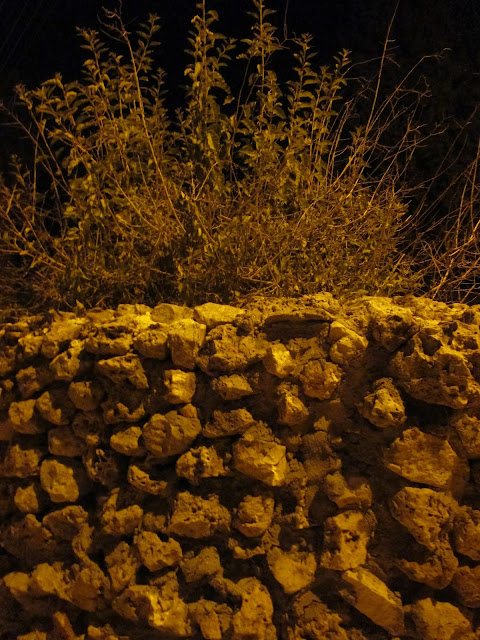 For a lark I changed the colors. In the Image option I clicked Negative,and this is what happened. 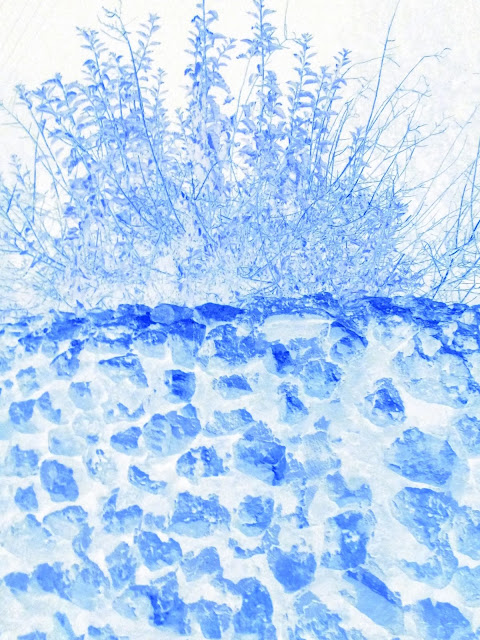 I also tried adjusting the colors and got this: 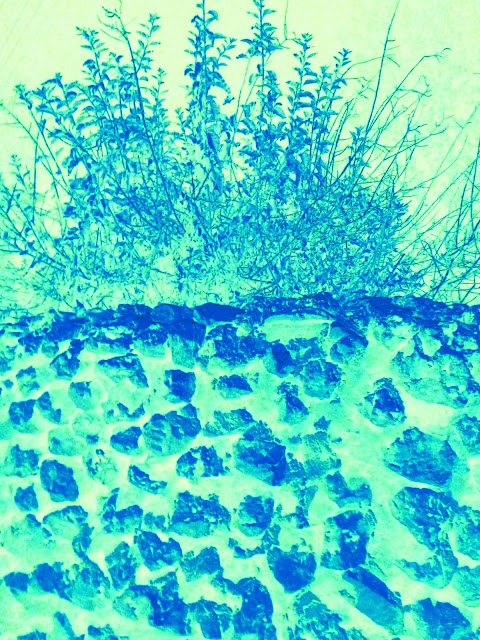 After getting some advice I went for the blue and white cropped.

Food Before and After a Fast

Today is one of the most difficult fasts on the Jewish Calendar, Tisha B'Av, the 9th of Av. It's the same long 25 hour fast as Yom Kippur, but unlike Yom Kippur  it isn't preceded and ended by festive meals. And we don't keep busy in shul/synagogue which is frequently well air-conditioned. This year was even more complicated than most, because the fast began during the last hour of Shabbat. Actually Shabbat was the 9th of Av, but we don't fast on Shabbat except when Yom Kippur falls on Shabbat. And this year the days before the fast were among the hottest, if not THE HOTTEST OF THE YEAR.

So when I was cooking for Shabbat I had to make sure that I prepared something special for Seudat Shlishit the last meal of Shabbat. I needed something that would be good pre-fast food. The experts say that carbohydrates are best, and I discovered during recent fasts that oatmeal was a great pre-fast food. The problem is that it isn't an easy Shabbat food. So I decided to try a version of Majadara, which combines rice and lentils. I bought brown lentils and brown basmati rice. To that I added, onion, mushroom and oil. 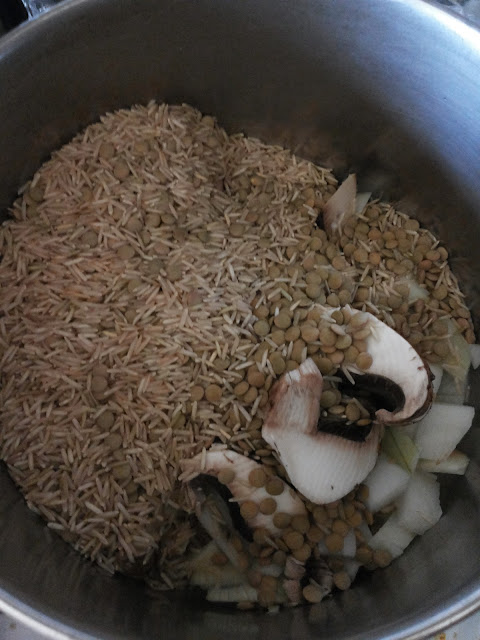 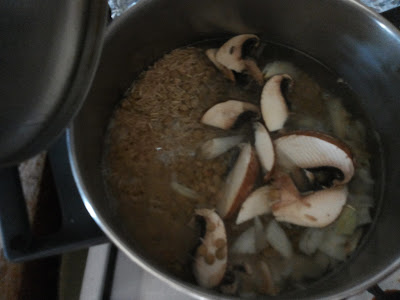 Once they were slowly cooking I added more than double the volume of boiling water. It was cooked covered, of course. I also served a version of my baked vegetables and salmon, plus some salad. 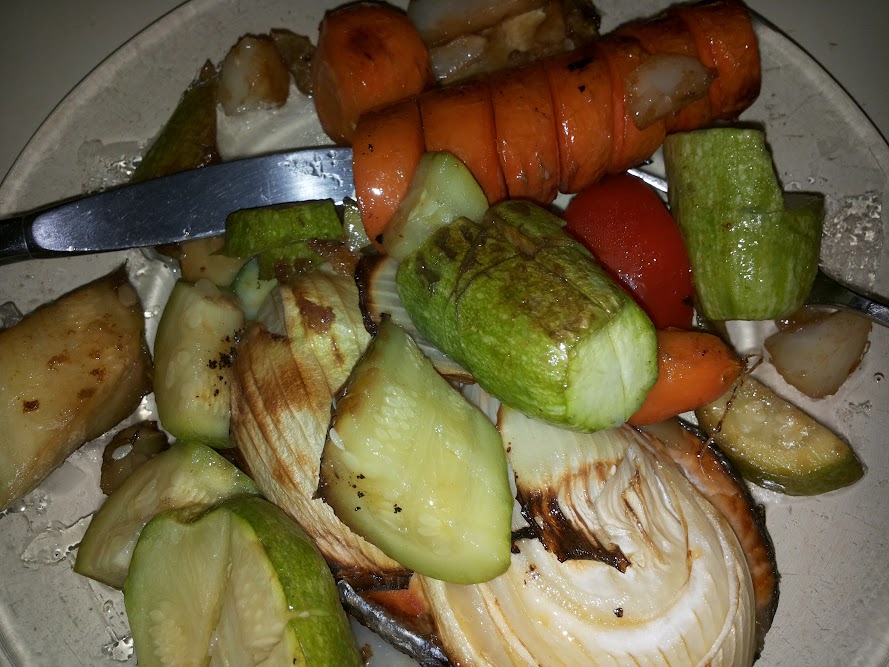 And we drank lots of water. Gd willing we'll do fine over the fast.

For breaking the fast, I plan on making my original vegetable, or easy vegetable soup, like I usually do.

9th of Av and Summer Heat

The Jewish Calendar is linked to the seasons and the Land of Israel, so I guess the fact that our greatest tragedies have taken place during the hottest days of the year must mean something. It doesn't rain during the summer in the HolyLand.


We have two fast days during the hottest and driest time of the year, the 17th of Tammuz and the 9th of Av, just three weeks apart. They both commemorate the invasion of Jerusalem and the destruction of the Holy Temple. If we're suffering now, with running water, fans and airconditioning, try to imagine how difficult it was thousands of years ago when the city and Temple were burning with real fire.

Our house doesn't have air-conditioning. Most of the summer I don't need it, but by yesterday the heatwave got to me, and I've been telling people:


"It's so hot I've been feeling young all of a sudden. It's like hot flashes from menopause!"

Never Tired of The Israel Museum

I was at the Israel Museum again, after a break of a couple of months. Some things stayed the same, while others changed, and as usual it was gorgeous and pleasurable. Here are a few photos.

The Israel Museum, Jerusalem, is a great place to visit all seasons of the year. And as you can see, I wasn't the only one who enjoyed the Israel museum that day.