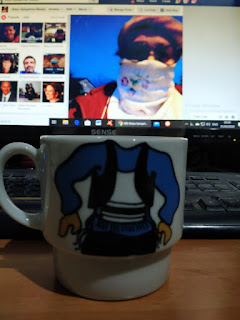 Who's Baile Rochel, you may be wondering.  Well, she's me.  That's the "Jewish name" I was given as a baby.  Besides being called Baile in Oakland Jewish Center, Bayside, NY, Hebrew School, I've never used the name in public.  When I became a Zionist in Betar, I called myself Batya, the name a substitute Hebrew School teacher suggested as more suitable for "Beth" than Baile.

A few years after we moved to Shiloh, I found this comic "voice" and named her "Baile Rochel."  My Baile Rochel column was a popular feature in Counterpoint, a pro-Jews in YESHA newspaper which was edited by Rachel Katzman and my husband, Yisrael Medad.

I was known as the "Erma Bombeck of Judea/Samaria."


Baile Rochel and Me, Too, Dieting Blues, Burnout

Back from the Trenches!

Exercises in a Straight-Jacket


Internet Repair, New Router for Me and "Baile Rochel"

Baile Rochel on The "Stand Up" Circuit

Baile Rochel Locked In? Nah! Can't Keep a Good Girl Down
Baile Rochel Tries A "New" Art Medium
Baile Rochel Wimps Out of a Swim, But Pumps Iron Instead

Hi Baile,
My publisher asked me to search for Jewish bloggers who might be interested in my latest book, THE MISADVENTURES OF RABBI KIBBITZ AND MRS. CHAIPUL.
Set in Chelm, it's a brief novel of smiles.
Please forgive me, but I can't find any other way to contact you.
I'd love to ask them to send you a review copy and/or an audio book.
Let me know. Or you can contact them directly - Lou Pop (pr@lightpublications.com)
Thanks
- Mark Binder

Sure thanks. Baile Rochel and I would love to read and review your book.