I made this Light Summery Lentil Vegetable Soup on Sunday to break the fast of the 17th of Tammuz, but I've been enjoying the leftovers ever since. And my husband has had it for lunch with pasta added to make it more filling. It's labeled "light," because the orange lentils cook quickly and disintegrated, unlike peas, rice, barley or pasta.Since I didn't measure the ingredients, I'll just list them. My cooking is very flexible. Measuring is very rare.
Cooking was in two steps. First I poured boiling water over the lentils, covered and waited over an hour. Then I added the cut up vegetables and the oil. Once it was boiling, I added more boiling water, plus the salt and pepper. Once it's boiling nicely, lower the flame to simmer for 35 minutes to an hour depending on your pot.
You can add other vegetables or leave some out. Generally I add some dill or parsley-- dehydrated is fine, but since I was fasting my mind wasn't fully there.

This is a very easy to make soup. Enjoy.

DISSONANCE, An Amazing Adventure In The Days of The USSR- A Book Review 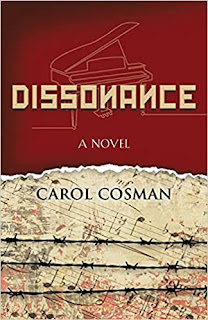 DISSONANCE A Novel by Carol Cosman is set in the USSR on the eve of the 1973 Yom Kippur War. Cosman deftly weaves the struggles of Soviet Jews, USSR dissidents, spies, Israel's security and the difficulties for elite musicians in this fast-paced historical novel.

Young Soviet pianist Natalia Aronovich is poised for international stardom when, in one shocking act, a Red Guard officer interrupts her performance and removes her from the stage. She later learns the KGB has arrested her father, Pravda journalist Mikhail Aronovich, for his undercover involvement with Soviet dissidents, refuseniks, and Israeli Intelligence.

For those too young to remember that era, DISSONANCE is a good introduction. Though I must say that to my knowledge, Cosman may have sanitized and underplayed the dangers.
DISSONANCE has very well drawn characters and a fast-paced plot. Actually the book could have been at least fifty or more pages longer if we had been able to read the escape, rather than just a summary. I really enjoyed reading DISSONANCE and recommend it to readers of all ages.
I became an activist for the Soviet Jewry movement as a high school student in the 1960s and even met my husband at a demonstration. In addition, he went on a short mission to the USSR in the mid-1970s from Great Britain where we had been doing Jewish Zionist youth work. Later on back in Israel we were active helping new immigrant Soviet Jews adjust to life in Shiloh.
It would be wonderful if Cosman could write a sequel, so we'd learn what happened to the very talented and brave Natalia Aronovich.

One of our Shabbat guests brought us a perfectly ripe pineapple. I served most of it at the meal, and it was enjoyed by all.  This morning I cut off a bit to have as part of my breakfast. 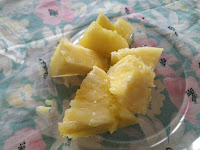 As proof of its ripeness it was very easy to cut, and I enjoyed eating the "inside" of the peel. I added some watermelon and then sesame paste for protein.
To be honest, I was very curious about the relative calorie counts and nutritional benefits of those two summer fruits. I knew already that watermelon is surprisingly low in calories, but I knew nothing about pineapples. 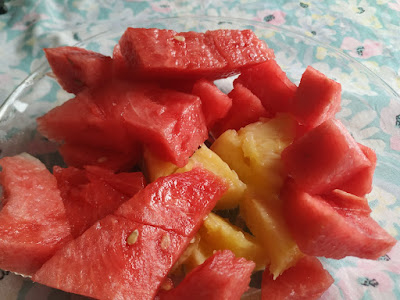 A New Format For Our Book Club 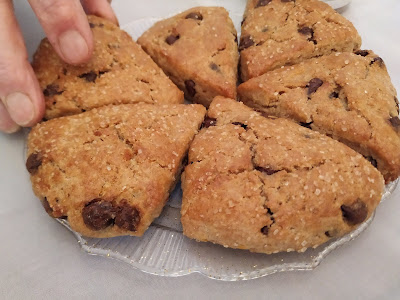 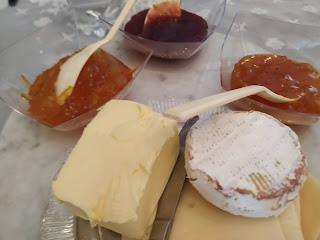 Last night we had another meeting of the Book Club, with a tasty, filling pot luck dinner. Dessert was scones with all the trimmings. So obviously we would have considered the evening a great success even if the discussion part had been a bust.
This meeting was the most ambitious so far of our new framework. We had been given (actually I think it was my idea) a rather open assignment. Read any book written by Herman Wouk, and as the date of the meeting got closer, I, as facilitator, loosened the requirement a bit. I told the participants that they could even watch one of his books as a movie or see one of the tv shows he had  written or was based on a book of his.
Our custom is to eat first and then talk books. Who can really focus on books when sitting around a table heaped with great food?
As we polished off the scones, we began the meeting. If I remember correctly, first I gave a summary of Wouk's life and discussed his book that I had read, This Is My God, which is a very personal book. Wouk was an Orthodox Jew in a time when it seemed that Jewish Orthodoxy was a dying breed. So we also discussed the state of American Jewry in the mid-twentieth century, which shaped Wouk.
Then I asked everyone to state the book they had read and I wrote it all down. There was only one overlap; two read the Caine Mutiny.  Each member described her book, and what she thought of it. The two who had read Caine Mutiny had a mini-panel discussion. Then we talked about Wouk and what we had learned together.
We all agreed that this new format is working for us. It's such a relief not to have to search for the same book and/or rush reading so it could be passed on to other members. Our next meeting with deal with a time in history, and we'll all have to find suitable books in the genre.
If you use any of our ideas or are a member of a book club, please let me know in the comments. Thanks
Posted by Batya at 6/08/2021 10:30:00 PM No comments:

This morning at 7:30am the Shiloh Pool opened for the season. Within a few minutes a handful of us were already in the water.

The water was clear, wonderful and reasonably warm for the opening day.  Lots of women showed up. This was our "women's hours," meaning that swimming was only for the 18+. Then the pool closed until early afternoon when girls, and adult women too, had their swimming time.

This "adult" swim time is one of the great advantages of the Shiloh Pool. We can swim, exercise and talk without young children splashing and screaming. No doubt most of the young mothers who had been in the pool when I was there, returned later with their daughters or infant sons.

Season at the pool is only three months, though we're trying to get it lengthened. Gd willing maybe next year. Our real dream is to have it winterized, covered and then the pool will be open most of the year. I was very encouraged by the amount of younger women who had shown up. Such an investment can't be covered just by the senior citizens. Many of us travel to Ariel to swim when our pool is closed, but the younger women don't have as much free time as we do. So if they enjoy the swimming enough... Gd willing we'll have an all year pool.