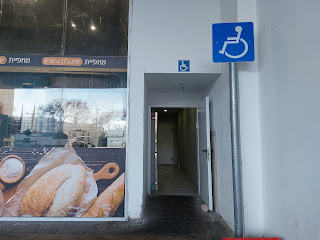 On the street level floor of the mall across from Ariel University, where you'll also find a drug store, bakery, FOX Home, Super Sol Deal, Tamnun, Golda Ice Cream and lots of other stores, there are public toilets. One is "regular" unisex, and the other is "handicapped," meaning the door is wider, room larger etc. according to standards. 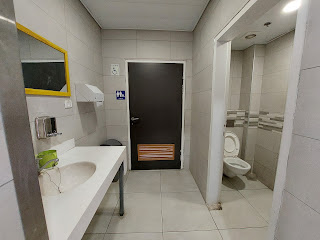 Everything was pleasant smelling and clean. There was toilet paper, soap, paper towels and a ritual hand washing cup.
I was there just after 7:30am Friday morning before catching my ride to a Jerusalem "Big Blue" Lions football game. It's a good thing I found that WC, because there wasn't any proper public toilet at the field in Ramat Hasharon.
This shopping area is just a short walk to the bus stop to Shiloh/Jerusalem, which is also a popular trempiada, place to get rides.
It's always nice to be able to discover well cared for public toilets. 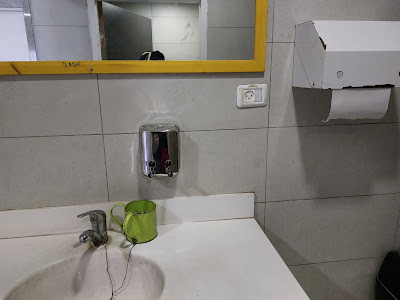 You may find it helpful to read my previous articles about life with hearing aids, updates #1 and #2, plus mask-tying advice for avoiding COVID and loss of expensive hearing aids.

This post will have three topics, which I hope you'll find helpful. The first topic concerns us hearing aid-wearers all.

As per Murphey's Law, one of the first times I left the house wearing my hearing aids, figuring I wouldn't be gone long, and since I wasn't far from home, I didn't take the kit with spare batteries. Yes, I got the battery model and not the rechargeable. That's what was recommended for Sabbath observers, since a new battery is supposed to last longer than a newly charged hearing aid.

Obviously you guessed it. Almost half the time I was out, I was forced to listen to low-battery-warning rings in stereo. Since I didn't have my case with me, I couldn't take them out, either. But the good news is that even as they kept nudging that it's time to change the batteries, they still magnified the sounds. I should have at least checked the battery percentage which can be done pretty simply on my phone. Yes, they're connected via Bluetooth. Volume can also be adjusted very easily on my phone.

After purchase of course, which I'll talk about later, I have to buy batteries. They can certainly add up in terms of expense, and as I noted above, they rarely last as long as you were counting on. I asked around and was told that it's cheapest to buy them in large quantities online. Just as I was about to bite the bullet and put in my first order, one of my sons told me that he found a whole bunch of packs in a home he was renovating. The former owner has no need any more... Once we ascertained that they're the same size I need, he passed them on to me. I checked them out with the audiologist, who said that even though their date had passed, they seemed OK. He also told me what to look out for as a sign to throw them out. So now I'm set for the next few months.

When I had my third meeting with the professional who tested and fitted my hearing aids he mentioned that I'd probably enjoy being part of hearing aids support groups on Facebook. Some are even specific to the brand Oticon, which I have. I quickly whipped out my phone and opened Facebook. Then I searched "Oticon hearing aids support," and suddenly there were a slew of groups to join. There aren't too many notices per day. Usually I ignore them after a quick read, and sometimes I even chime in with some advice. Hah! Me the expert! But to be totally honest I'm shocked at what American have to pay for hearing aids, thousands of dollars in many cases. People even get second hand hearing aids, which I find pretty sad, frightening and pathetic.

Here in Israel we're all members of a "sick fund," and once we're recognized as needing hearing aids, they highly subsidize one pair every three and a half years. I paid just a few hundred dollars for the pair. And I have friends who got theirs for nothing from special "funds." They were new, not second hand.

I hope this has been helpful and am looking forward to your responses in the comments. Hoping to hear from you.... 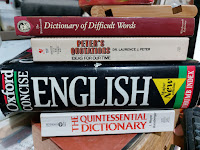 We all have our pet peeves, and there are various genres for sure. Maybe genre is the wrong word. Maybe I should have written categories. I'd hate to start a rant like this with a glaring linguistic faux pas mistake, but thanks to Professor Google I've just discovered that the actual definition of genre  is category. Honestly, I never knew that before. Spanish was my Foreign Language in high school, not French.Before I share two glaring ones, at least they're glaring to me, I'd like to invite you to share yours in the comments, please.