Way back when... could it only have been just over a year ago... in the days when summer nights were made for enjoyable beer festivals, I attended a beer festival in Jerusalem and complained about the latest Israeli craft beers. The big thing was "flavored beers," and the artificial flavoring plus beer just didn't work. I wrote Where's The Beer?" Jerusalem Beer Festival 2019. One of the worst was a "cherry beer" that tasted worse than a children's antibiotic.

That experience put me off of flavored beers, however... 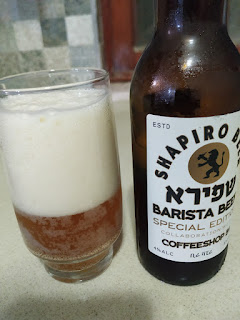 When the beer maven, Doug Greener blogged about coffee-flavored beer... I began to crave it, coffee beer that is. One of the companies making coffee beer is my favorite, Shapiro, and  I just had to buy some. But how was I going to buy it? The country was in corona COVID lockdown! There was no way I could justify traveling by bus to Jerusalem for Barista Beer. And since it's a "limited edition," no guarantee I'd even find any.

What could I do? I bided my time.

Finally it became legal to travel to further than your closest stores to shop for food. I had also used up almost all of my jersey yarn for crocheting projects.

Siyate d'Shmaya, Hand of Gd, beer and yarn stores are in the same neighborhood, so off I went to Jerusalem today. 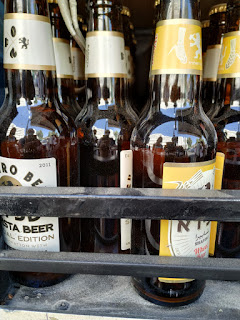 At the very first liquor store I passed, there it was... calling me. How'd it know? I bought a six pack, three barista, two IPA and one stout. That's because I hadn't found an open yarn store, so I wasn't schlepping. An added bonus was that since I bought six they could safely pack them in a special carton. And Baruch Hashem, thank Gd the carton fit into my backpack. And then while rushing to catch the lightrail to my bus I found a store with the yarn that was selling by "orders" outside their door with immediate "delivery." So I had lots to schlepp, but I bought what I needed.

Now, no doubt you want to know how the Barista coffee beer tastes.

Simply put, coffee and hops make a great shidduch, match. There's no artificial taste in Shapiro's Barista coffee beer. Shapiro uses a pale ale, not my favorite beer, but when it's paired with cold brew coffee, it's a hit. The coffee gives the pale ale more flavor and body. Drinking it I didn't feel like I was drinking a flavored beer. There's something more natural; the flavors blend nicely.

I was so excited about the beer I drank it as soon as it cooled. Barista is great after a busy day, and I'll try some on Shabbat morning, too. Yes, it's definitely recommended.

Picture of the Day 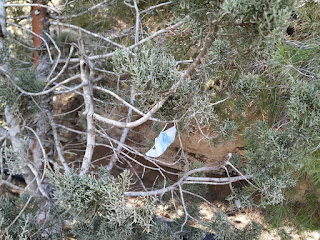 Sure better than all those littering the ground. 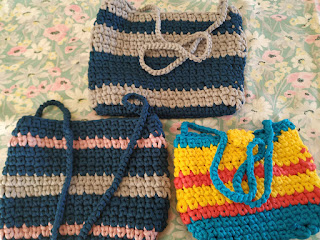 I've been having great fun crocheting. These are my latest bags.
The bag with the yellow and pink, lower right even has a crocheted button. It wasn't hard to do, but now I can't find the youtube I got the instructions from.
Crocheting the bags is amazingly, yes, surprisingly easy. No, I don't use a pattern. I crochet, but I know nothing about the theory, the technique or names of stitches. I crochet by intuition aka guess-work.
I really enjoy crocheting with jersey yarn, about 95% cotton. Before I made the bags, I crocheted potholders and small rugs. The bags are much easier. Many times I had to rip out lots of stitches when making the potholders and rugs. Round crocheting is much more complicated. Too much increase and it's floppy, worse than pizza dough badly tossed. And if you don't increase enough you're stuck with a bowl rather than a plate.
The base of the bag is sort of an oval, and after that just crochet without ever needing to increase or decrease the stitches. You just have to be careful to switch colors in the same basic spot on a side.
Finally I found an easy solution to the "button problem." A couple of years ago, when I bough all sorts of beads to bead necklaces with my granddaughters, I bought some large beads. I sewed one onto the bag and then added a "hook." 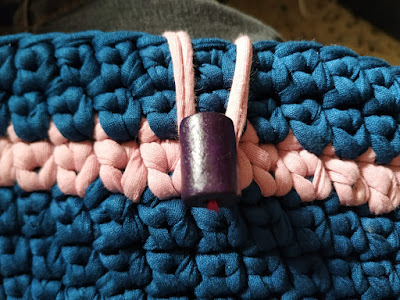 I just had to write this. What do you think?

I just have to get this off my chest.

It's really driving me crazy when I hear/read advice to soon to be arriving olim about what to bring, what they must have from the "old country" when living here.

People treat me like I'm nuts for saying they should try what's here in Israel, and they may even like it better.

Honestly, what's the point in moving to a new country if you want to eat the same foods, cook with the same spices, get the same medications, set up your house to look like you're in Monsey, the Five Towns or New Jersey?

Where's your sense of adventure?

Aliyah-
should be like a proper purification in the mikvah, all orifices open, accepting, cleansed

Aliyah-
like a marriage, you must change yourself for it to be successful. 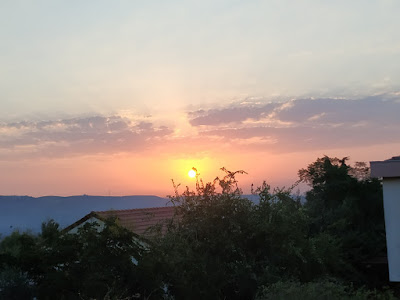