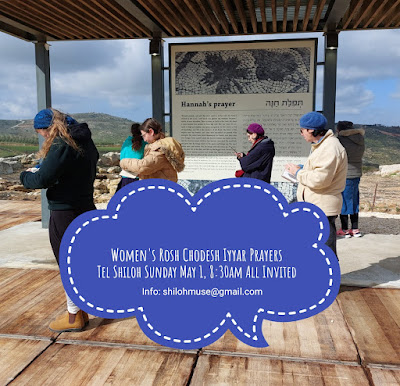 As soon as Passover is over, here in Israel we get started on Holocaust Memorial Day and Memorial/Independence Day planning and programs. I don't forget to squeeze in Rosh Chodesh Iyyar. This year it's two days, technically, and the women who usually join me for Rosh Chodesh Prayers at Tel Shiloh have chosen Sunday, May 1, the 30th of Nissan, 8:30am. 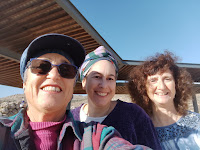 If you haven't been to Tel Shiloh for awhile, it's worth planning on spending a few hours there. There's always a lot to see and do. For more information 025789111 and visit@telshilo.org.il. 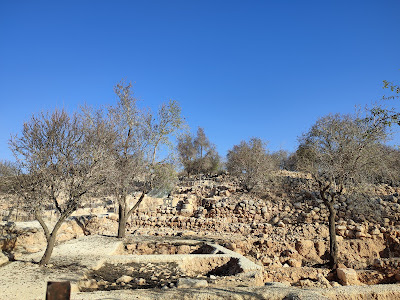 What A Difference A Tree Makes

That enormous tree, which had been growing as quickly as Jack's beanstalk is now history. I paid a neighbor to chop it down and take it away. Last year it wasn't all that big. I could easily hang out my laundry, which dried quickly, and it certainly wasn't taller than the orange tree then. 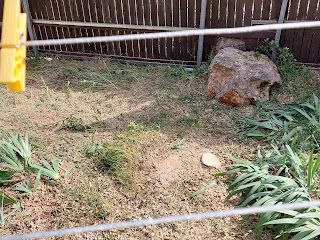 Suddenly, this year, as winter turned to spring, laundry didn't dry all that well, and that strange tree, which grew uninvited, began to take over the yard and barge into the orange tree. Before Passover, even though I was sick with COVID, I could see that it had to go before it strangled the orange tree.

Yes, it's Shmitta year, when we're supposed to give the fields and gardens a break. But when a non-fruitbearing tree endangers a fruit-bearing tree, it can be cut down. 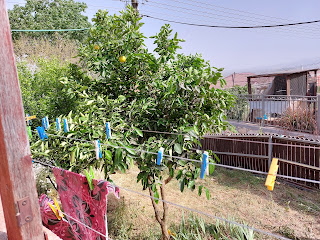 Today my neighbor came over with his electric saw and got to work on the tree, which was actually two or maybe more like Siamese twins or a two-headed monster.
Within a few hours, they were gone, and I felt that I could breath. I hadn't realized how much that two-headed monster of a tree had taken over my yard.
I immediately did a couple of loads of laundry and was amazed at how quickly things dried. Laundry hadn't been drying the past few months, and it wasn't because of winter. We've been in the house over 35 years, and laundry had always dried quickly, until this year. Apparently, the tree trapped in the humidity, dampness in the clothes.
It's like having having cataract surgery... Suddenly I can see from my merpeset (terrace.)

I received a box of goodies recently from KAR-BEN Publishing. It included children's books on all levels, from toddlers to young readers.

This first review will be of two books written for young readers. Both books begin with the main characters being bullied at school. Apparently, it's a big issue in the United States and including the problem and how to deal with it makes the books more popular and marketable. Another thing they have in common is that a parent of a main character in both books has passed away, which is a reason why their grandparents are helping to raise them. 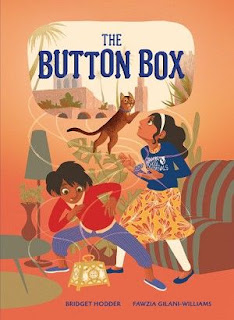 Let's start with The Button Box by Bridget Hodder and Fawzia Gilani-Williams. Ava and Nadeem are first cousins who share a Ladino speaking grandmother, who's their after school caregiver. Ava is Jewish, and Nadeem is Moslem, as the children's religions follow their mothers'.
Within the family, the intermarriage of Nadeem's parents is ignored as an issue; it's just accepted, non-judgmental. But in school, which apparently has mostly Christian and Jewish students, there is prejudice against Nadeem, and Ava is encouraged by some of the Jewish kids not to hang out with him, a Muslim.
Ava and Nadeem are both exposed to their mutual Jewish Sephardic heritage by their Jewish grandmother, and that's how a magic button brings them to meet their ancestors and learn a fascinating story based on history.
The Button Box is full of surprises. The success of Harry Potter has shown book publishers how much children, and adults, love fantasy. I'd also recommend reading the book out loud, chapter by chapter and discussing it.
There's a very helpful Glossary at the end, plus additional information about Sephardic Jews, Muslims and relevant historical background. 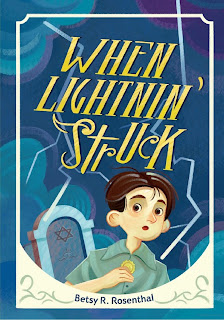 When Lightnin' Struck by Betsy R. Rosenthal is another amazing book that kept me in suspense. It's set about a hundred years ago in Odessa, Texas.  James, called Butch by his grandfather, has a lot to deal with. In school a bully keeps attacking him, and he only has one real friend, Paul, a recent immigrant from Odessa, Russia.
A few years before the story begins, James's father had been struck by lightning and died. Later on his alcoholic mother was jailed, so he began living with his grandparents. And then his beloved grandmother, a healer from Mexico with many secrets, passed away. Minutes before her death, she gave James a strange, secret and special coin.
When not in school, James keeps himself busy by helping his grandfather in their diner and spending time with Paul's family. Paul's family is different from the rest of the town in two big ways. They are recent immigrants and seem to be the only Jewish family in Odessa, Texas. That's how they end up helping James decipher his grandmother's secrets.
There's lots more to When Lightnin' Struck, because James is an interesting and complex character. He's an excellent student and had learned a lot of his grandmother's healing techniques before she passed away. All of this helps him with other issues, besides giving him a direction, a purpose in life.
I highly recommend both The Button Box and When Lightnin' Struck and have already promised them to one of my grandchildren and told her she should pass them on to her cousins from her Sephardic side.
The Button Box- Product details

Corona/COVID No One's Immune, Yep I Got It

Yes, I did get Corona/COVID.

Thank Gd, since I'm fully vaccinated to the maximum, it has been a relatively mild case. I've already graduated from quarantined to recovering, thank Gd.

I really am grateful that there are only two of us here in the house, and we have space, rooms, bathrooms etc. I can't imagine how those who live under crowded conditions manage to safely keep their distance.

I'm also grateful that the weather has been warm enough to comfortably keep windows open after an intense cold winter. My priority has been to keep my husband healthy. It has been strange staying masked at home, just the two of us.

Besides the awful fatigue and more congestion than I'm used to, I've had a pretty easy case. Fatigue is a problem, since even at my healthiest I don't manage to sleep enough.

I understand that I should be taking it easy for the next few weeks and not to push myself. At my age, that's a lesson for all the time. Recovery is always  harder the older you get.

Again, I thank Gd for my blessings, and this year, like the year my father passed away just a few days before Passover, I'll be doing minimum cleaning. I have to concentrate on the most important thing, the fridge/freezer. Stove top and counters need a cleaning and covering. I'm really glad that I chose the spare room as my first big project, so it was waiting for me when I realized that I was positive with Corona/COVID.

Stay healthy, and always look at the bright side. 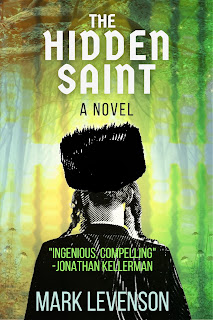 The Hidden Saint by Mark Levenson is not my usual genre, and nobody is more surprised than yours truly that I truly enjoyed reading it. That's one of the greatest advantages/gifts to being a book reviewer, the books "choose" me, rather than my choosing them. Of course, I don't accept all offers, but I certainly try to be welcoming and daring aka open-minded.
I'm not really familiar with the "golem" and fantasy genre, but The Hidden Saint is so well-written that I was immediately drawn into the story of the young groom to be who later, mysteriously found himself far from home and had to create a golem to help rescue his family and correct his past sin.
One thing that I really liked and helped me get into the story is that the characters aren't chassideshe mystical types. Rabbi Adam only finds the special ancient book with the instructions when he's in need of the golem, because one of his children has disappeared and the others are mysteriously close to death. There's a faintly ironic tone, which at least I "heard." Rabbi Adam wonders if he had properly formed the strange mute mud creature and seems surprised that he and his family are in such a situation.
The Hidden Saint is a book for all ages, young as well as old. And one doesn't need a strong Jewish background/knowledge to understand. It's written in English, not laced with Hebrew and Yiddish. For those who like this sort of fantasy, you don't even have to be Jewish. Yes, I highly recommend The Hidden Saint. 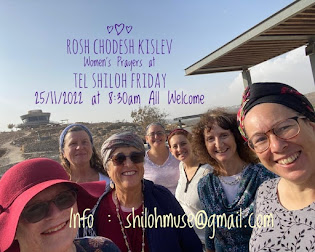