I've really been a good girl, staying close to home and not inviting people over. It gets embarrassing at times, since some of my neighbors really need the invitations to socialize. I try to keep inviting friends to walk with me, but...

Sometimes even I need an escape. So a friend and I went to Sha'ar Binyamin a nearby shopping area, which can be easily reached by bus. We went two days before the latest lockdown began. She needed to take care of and get a few things. I just needed an escape. 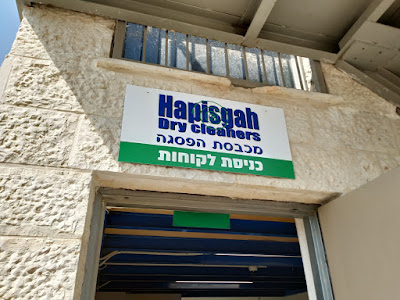 Stop number one was the Hapisga dry cleaners, where my friend dropped something off. It was two minutes' walk from the bus stop.
Then we wandered around the smallish "Baba Mall" and bought some disposable items. I got a size of storage containers which I needed. 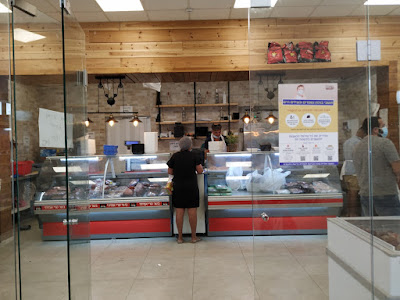 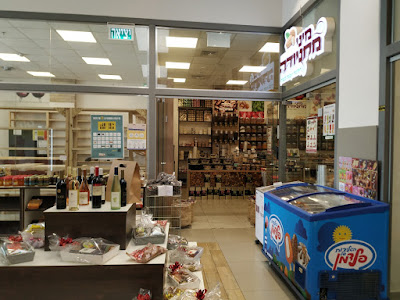 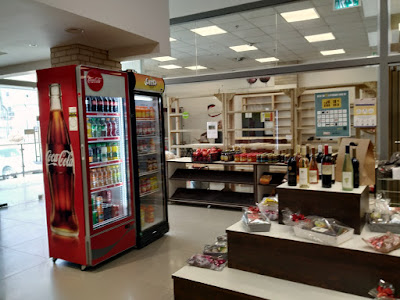 In the chumus place, we had something to drink. I decided to go for a beer, since it was a celebration of sorts. Even now, two weeks later, I haven't a clue when I'll be able to travel again.
My friend bought a few accessories in a nice clothing shop. We also peeked into the phone store and lots of other places.
Afterwards we walked up to the other stores in Sha'ar Binyamin. I was hoping to buy more jersey yarn, but the selection was awful.
Instead of walking up and down the streets of Shiloh, it was great to walk someplace else.
Then before getting on the bus home, we went to the Shifon Bakery which had just moved to new premises, directly across from the bus stops. I bought my husband a honey cake, but in the end just a couple of hours before lockdown, one of our sons came with his family for a quick pre-lockdown visit. They gave us a cake baked by our talented daughter-in-law which tasted much better than the store-bought one. 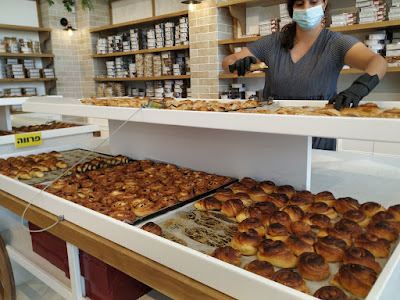 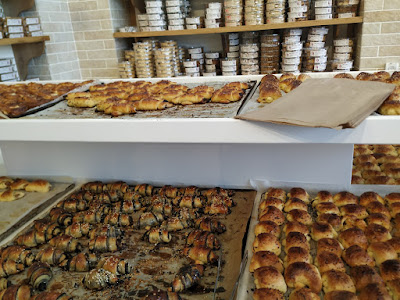 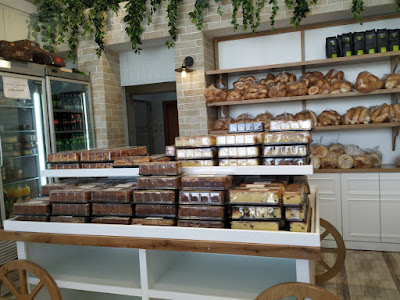 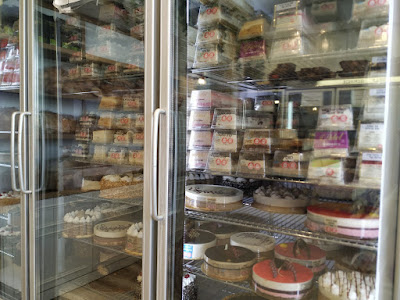 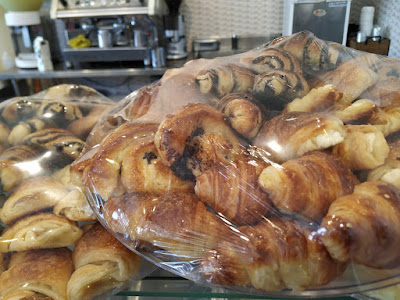 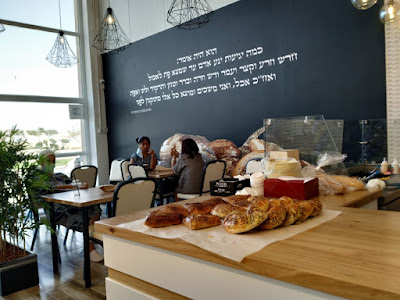 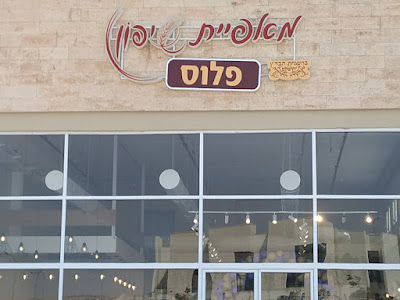 Yes, trying to survive corona COVID in more ways than one.

The New Jewish Year 5781 Has Begun, So Far Amazing


On one hand I must admit that Rosh Hashana was awfully depressing. I miss having guests and being hosted. I remember the days when our dining room extended into the living room with multiple tables, all the family plus guests. And then we'd be hosted by neighbors for other holiday meals.

This year my husband and I ate by ourselves, alone, just the two of us. Our children had their own holiday meals. We'll be eating leftovers for the next few days, and I'll try not to think of way back when... It has been months and months since I've entered the local shul, which is literally in our backyard. I stopped staying for the entire prayer service about a year or more ago when I found the the cold drafts too uncomfortable. I even bought a hooded coat that makes me look like Darth Vardar in powder blue. I decided to give up on the "window wars," preferring not to fight with anyone.

We had to sign up for the limited seats for this Rosh Hashana, so I took the plunge. Then a neighbor, who knows me well, said:

So I decided to try something new. There's an outdoor minyan almost directly across from my house. I set up a chair just outside the door, and that became my private "Ezrat Nashim," Women's Section. Since it's well in my property, I didn't even need to wear a mask. I could hear most everything, thank Gd. 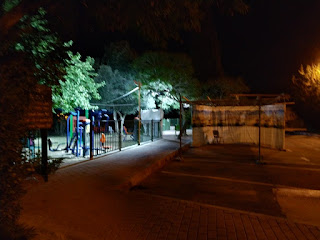 Even better, I heard lots of shofar blowing. The early minyan a bit further way must have blown shofar outside, since I heard theirs. And of course I heard the park one. And I heard from our synagogue, the Yemenite minyan and when someone blew for neighbors across the street.
The neighborhood was live with the sounds of shofar blowing!
The multitude of prayer groups all over was so much better and more spiritual than sitting in a packed synagogue.
Actually, once the government allowed limited numbers to pray in the synagogue, my husband returned and sits in his regular spot. The synagogue is much emptier than it used to be. Many neighbors now pray in parks and backyards, so as long as the ones who prefer the shul building spread out, it's considered "safe."
During our family Pre-Rosh Hashanah zoom, I had been asked to give a blessing to all the clan. I found myself saying:

"Be thankful for what you have."

This may not have been what anyone expected; the usual blessing is for health. But I wonder if this whole corona COVID life change/challenge/pandemic has been to shake us up. Maybe Gd wants us to look and what we have and be grateful/thankful. Suddenly we're so limited/restricted, and we must learn to accept and welcome it.
There's an expression: 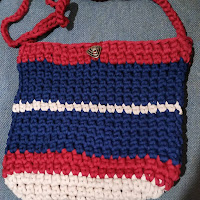 Right now, unless you're a scientist working on a cure or vaccine for corona COVID, you're best off trying to make lemonade. I've also been crocheting.
What sort of lemonade have you been making?
Posted by Batya at 9/21/2020 01:39:00 PM No comments: 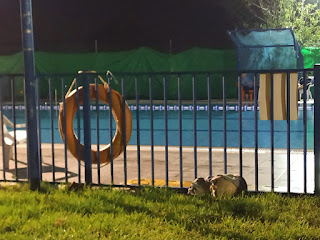 Yes, this year's Shiloh pool season was a lifesaver for sure. It's not that the life guards reported to me that they had to jump into the water to actually rescue anyone, but for many of us the pool kept us feeling alive this hot summer.

Even though Shiloh has had a swimming pool for decades, because of the corona virus/covid there was no guarantee that it would open. The truth is that opening was delayed and only happened because of behind the scenes pressure by some dedicated swimmers.

One of the public venues the government had declared as dangerous contagion areas was swimming pools, both indoors and outdoors. 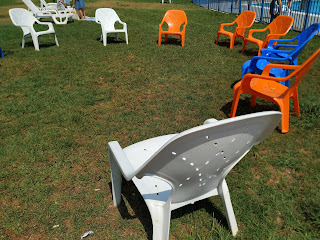 When the official corona "danger" status of outdoor pools was removed, the process of opening the Shiloh pool sped up to an Olympic sprint. In a fraction of the time it usually takes, our pool manager had the pool full and the landscape all gussied up for a shortened though much welcomed pool season.
Unfortunately, after a very short time the government reneged, and the pool had to close. But just over a week later, the government changed its mind, and again the pool was full of water and happy swimmers.
Many people hired the pool grounds for "corona-safe" events, even weddings, since there's space enough for maximum permitted attendees in different sections. When the official season was over the manager took advantage of the water-filled pool and offered post-season women's swim time each morning. We paid per swim, and enough women showed up to cover the extra expenses.
2020 has been a long, hot stressful summer, and not all communities in Israel opened their public swimming pools. Regulations were complicated and changing. Also, local officials didn't want to be responsible for a rise in corona/covid victims. As one of those with the highest attendance rates at the pool, morning hours only, I'm really happy that Shiloh's local government decided to take the plunge and get our pool open. It really saved me this summer.
Gd willing there will be a longer and less stressful season next year. Our dream is to find the financial backing to build around the pool and make it an all year swimming pool, with the Help of Gd.
Our thanks to the local council and all the pool staff and especially to Gd Almighty who kept us happy, splashing and healthy all summer. 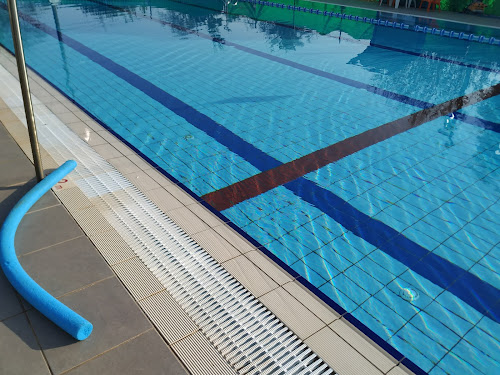 Israel's Heading into Another Holiday Lock-Down 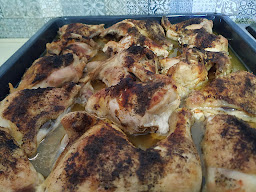 I have no doubt that the new upcoming Rosh Hashanah lock-down is because people have been making Rosh Hashanah holiday plans as if it's a regular year. Too many people are back to inviting their nearest and dearest who actually don't live nearby at all.
Even worse, some of those invited to green locations aka communities without any recent corona COVID ill come from cities/neighborhoods with people who are sick with the virus.
We survived Passover alone, when we're supposed to be telling to story of our slavery and rescue to our children, so we can survive Rosh Hashanah, two days of prayers, on our own.
I'm also not hysterical over the "how will I shop?" question. During the first lock-down, we were able to order from our local supermarket, and everything was delivered. My only problem, again, will be getting new yarn and buttons for my latest craft project, bags. I find the crocheting a wonderful way of keeping my hands busy when listening to classes or watching programs and movies. An added bonus is that it keeps the food out of my mouth when I shouldn't be eating. 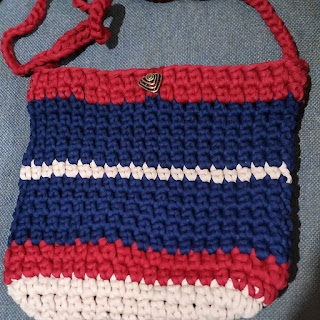 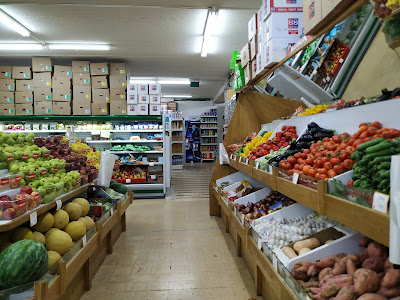 I trust that our supermarket manager and, of course, chain's owner will keep it stocked. During lock-down #1 we received care packages from the government, too. I developed a number of recipes with the foods we generally don't buy. 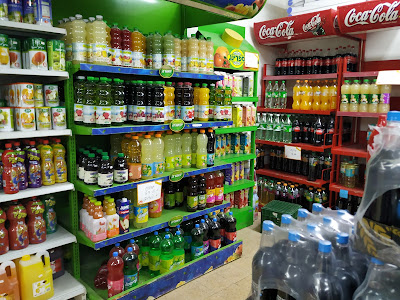