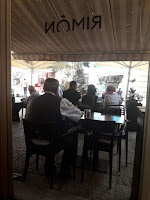 For as long as I remember Jerusalem, going on forty-nine 49 years, there has always been a restaurant, or two, called "Rimon" just off of Zion Square on Lunz Street. And I've had some wonderful meals there. So when a friend and I were looking for a place to meet for lunch yesterday, The Rimon was an easy and popular decision.

I had been looking forward to ordering their "Business Lunch," and my friend expected to have their breakfast she loved, even though we were meeting after 1:30. We had ordered these things many times at that hour. 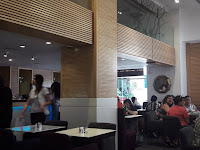 When I didn't see the business lunch on the menu, I just figured that the waiter had forgotten to give the extra sheet to us. And my friend was concerned that nothing was on the menu about breakfast being "served all day."

The waiter was friendly and charming, but that didn't help, since he had bad news for us. Both the attractive business lunch menu and breakfast all day are history in the Rimon. We had a very tough time finding something to order in the newly revamped menu. My friend ordered the "Crispy Salmon," and she told the waiter that they should leave out the spicy mayonnaise. One bite and she was in pain from the spices. They forgot, but at least the waiter offered to replace it and give her one without spicy mayonnaise. She liked the salmon and gave me a small piece. I found it awfully oily. 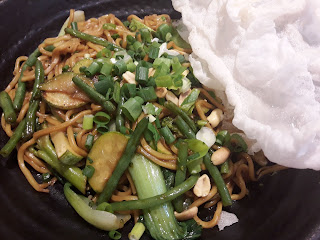 I wasn't happy with any of the salad options, and I didn't want to spend more for a fish meal. Many of the so-called salads were really sandwiches, or based on bread. And there were too many ingredients, which usually means too much oil and salt. Finally I chose the Asian Salad, even though it's based on pasta. At least it had some nice cooked vegetables. If you're wondering what that white stuff is on the right, you should be. I think they called it "rice sheets," or something like that. It looks a bit like thin Styrofoam, and it has less flavor than paper. Yes, it was that awful.

We were enjoying talking, but I needed to leave, and they hadn't given us our bill yet. I suggested we just walk out. They probably wouldn't have noticed. But instead we finally got the waiter's attention and asked for it. Then it took ages until they gave me my change. 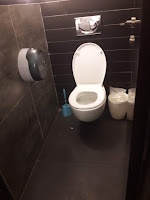 Before leaving I went up to the WC, public toilet, and they were in awful shape. Luckily I noticed that there wasn't any toilet paper before closing the door, so I took paper towels. A woman came up right after me, and she complained too. Then we began discussing the new menu. We agreed that everything in the Rimon had gone downhill except the prices.

I guess that since they upgraded their menu it is no longer suits you so bye bye to YOU. A person who chooses to couse demage to a place she was eating at for 40 years just because she didn't enjoy herself once shouldn't be welcome there anyway. The shame (and shaming) is on you.

Wow. I really hope you don’t work for them. What a response to a critic. No wonder you need to be anonymous!

My wife and I ate there recently. Our experience was more positive.

Well Sandra, I can only assume an ordinary person would look for an ordinary food so the writer is right for not going there anymore. And no, I do not work for them, only really appreciate them as a restaurant who always cares about their costumers and if I would have a "critic", I would go directly to them to give a *constructive* feedback.
In any case, I thought of sending you the address of "Cofix" for you to have great Israeli food in 5 Shekels but I am sure you could find it easily yourself (and serve yourself). Bon Appetite!

I used to eat there , as a tourist , way back in 1970 -71 , when the only really good stuff was an Israeli steak (not really steak as know it today), Arab salad with NO oil, and deep fried chips. dessert was compot, and the drink was mitz petel. Friends and I loved the place.

Everyone has the right to their opinion. My report is accurate.

We told the waiter that it was hard to choose, since dishes we wanted were't available. He was the best part of our experience in Rimon, but he couldn't change the menu for us.

You can see in the picture that no toilet-paper is coming out of the dispenser.

Batya, do you think these changes are only at the Lunz location? What about the Mamilla one? I really think a cafe that stops giving business lunches is in for trouble. I've noticed a few places that stop it, and people complain and pretty soon it's back. I haven't eaten at that downtown location for years, and years ago it was a fun place to go. Sorry you had that experience and maybe they will rethink their "new plan".

I have eaten there plenty of times never loved the food, not that it's bad I'm just used 2 fancier places abroad, but 4 jerusalem it's of the better places.

I was at a Bar Mitva at the Mamilla location recently. It was really lovely. An abundance of food, tons of variety and all delicious. They were so helpful and it was a really, lovely experience. Highly recommended for a lunch after a Bar MItva at the Kotel.......

Of course I can give an opinion. And for the last decade or more Rimon Zion Square is not considered one of Jerusalem's fine dairy restaurants. I used to love it, but no more.

The last 2 times i was at Rimon Mamilla it was dismal. I even had a coupon for a complimentary dessert/coffee from my last complaint and they refused to honour it. Like the write, the service was terrible, the food mediocre, checkout was a long wait, they forgot the bread or the water or the ice cubes etc. I will try somewhere else next time.

Good to know. I have had better time at Piccolino.

Just clicked through now because our experience has been very positive, but I realized it had been a long time ago. I guess things have changed. :-( And then I saw the vitriol with which this anonymous person attacked you for the "crime" of HAVING AN OPINION. Restaurants change, for various reasons, and every time they do, they risk alienating longtime friends and loyal customers. Anyway, I'm glad to know. I'm always really upset when places I liked suddenly go downhill. :-(

I haven't been back since.
I'd rather go to Piccolino where I can get a quality meal for about the same price.