This week some of my friends took me out for a pre-Birthday Lunch at Tereza, Cinema City Jerusalem. Afterwards we saw The Guernsey Literary and Potato Peel Pie Society, because we had read the book for our book club. 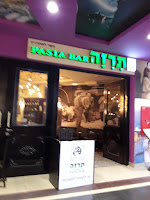 At first we had trouble choosing a restaurant in Cinema City; there are so many. But despite the fact that Tereza bills itself as a "Pasta Bar," we chose it. It looked more interesting, and was relatively quiet. Apparently it's a chain, and I couldn't find a phone number for the branch itself, 1-700-700-338.

Tereza offers those popular lunch specials in which for the price of just the main course you get a starter and juice, bottled water or soda. We all chose different menu items, breakfast, fish and pasta. 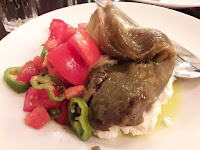 My first course of grilled eggplant, which included salad and white cheese, was so large and filling, I had them pack it up for me to eat the following day for breakfast. I chose a fish which was delicious. The bones had all been removed, so it was easy to eat. As you can see, there was also a large green salad, which I chose from the side dish options. The others were all carbohydrates. 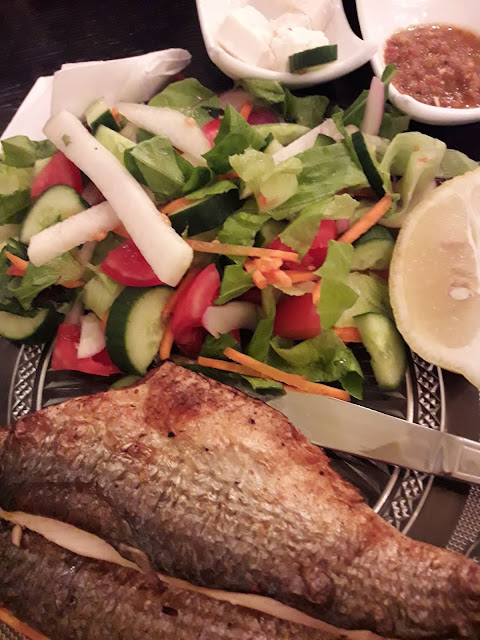 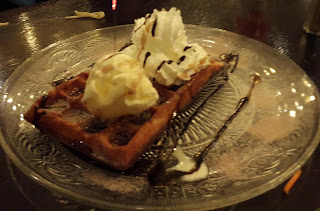 My friends ordered us a celebratory waffle with ice cream and whipped cream for my upcoming birthday. It was the perfect end to a birthday lunch with close friends. And for me, eating a quarter of such a treat was enough to satisfy my sugar cravings. On that we were split. Half of us said that we were glad to share it, while the other half would have been happier eating an entire portion.

We all agreed that Tereza was a great choice. We loved the food and the atmosphere. Service could have been a bit swifter, but we made it to the movie on time.

Being that it was a Tuesday afternoon, the senior tickets were reduced to NS14, if I remember correctly. We also enjoyed the movie and agreed that the screenwriter did a pretty good job adapting it. With the exception of the non-American actor playing the fiance, who had an awful fake accent, casting was on target. I love the fact that British actors have real faces, unlike Americans who look like they've come off an assembly line in a toy factory.

The Guernsey Literary and Potato Peel Pie Society is a movie suitable for all ages.

Playing the fiance:
Glen Powell was born on October 21, 1988 in Austin, Texas

Then I stand corrected. His accent is peculiar.