Since, as my sister says:

"We're from a family of artists."

I'm always on the prowl, the intrepid searcher, for a new art medium which will make me feel like one of the clan. Luckily my cheerful, optimistic disposition hasn't given up the fight against PTS post traumatic stress from all the times my horrendously unsuccessful attempts to draw and paint got me nothing but clear unmistakable mockery and criticism.

Thank Gd, a few decades ago I discovered photography and more recently mosaics which are art forms, art media, requiring no drawing at all. Jackson Pollock got away with splashing paint all over the place, but early in his career he showed that he could produce stunning realistic images. The same goes for Picasso. They didn't go abstract because they couldn't draw.

A few weeks ago I found myself signing up for a two session Pottery Workshop. There were two things going for it. One is that the price is subsidized, though I'm still not sure what it will cost, and secondly I envisioned myself producing a beautifully designed and molded mug for my morning coffee to be photographed for my daily #morningcoffeehaiku and #cinquains. 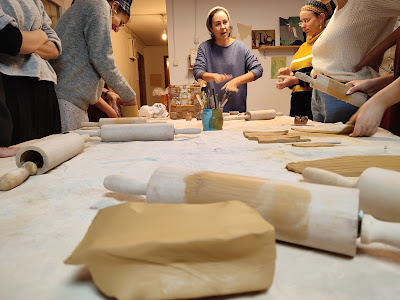 The Art Center is a short walk from my house, but of course I got there ridiculously early and helped the young woman in charge set the room up. As the other participants showed up, I realized that they were young enough to be my granddaughters. I had even been at the weddings of the parents of two and am friends with their grandparents. But I'm used to being the oldest... Of course I was also the only one masked, since I don't know...

We finally got started an hour or more after I had arrived*, and my eyes were shooting poison arrows at the teacher. While we had been waiting everyone was chatting, and some were noshing. The leader kept asking me to participate, but I was embarrassed to say that I'm waiting for my hearing aids to be ready. They weren't even at the age of reading glasses. I could barely hear them, so I kept tuning out.

I understood the instructions, but deja vu nothing I tried to form looked like it was supposed be. The clay I rolled into strings looked like a snake that had feasted on a few mice, rather than the perfectly identical diameter strings I was supposed to produce. After trying to make some sort of bowl, similar to others, I gave up. My attempts looked like the awful "worst in the group" blobs of my childhood memories.

I squished it all together and decided to go in a totally different direction, a "plate" for the Passover Seder.

"A Seder Plate?" my classmates asked.

"No, just something to place the matzah on." I answered.

"Maybe you should make it more perfectly round" they gently suggested when I was almost finished.

"No, hand matzah isn't usually perfectly round," I replied with the confidence of a true artist.

The teacher has taken all of our "pottery" to dry and then bake in her special oven/kiln. Next week, Gd willing we'll get to paint our art before being baked again. 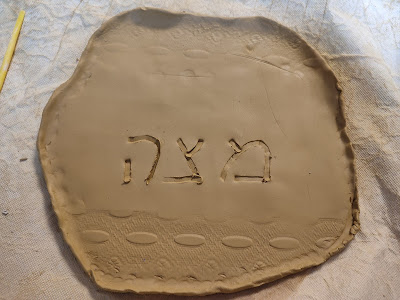 *Gd willing, I'll expand on this in the future, since this story is long enough.

Thank you, though compared to all the others....