"Why We Fly" Book Review 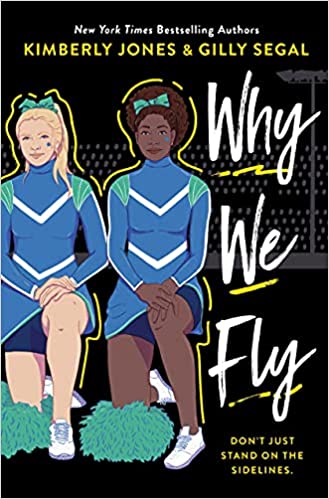 Why We Fly by Kimberly Jones and Gilly Segal is probably the most difficult book for me personally to review. I feel torn and as always must be totally honest. I'm conflicted.

On one hand Why We Fly is an excellent, well-written book for youth touching realistically on numerous important timeless issues. Even though I'm more than half a century past my teenage years I could easily relate to the main characters and all of their challenges. As I'm sure you've noticed, there are two authors. Why We Fly is written in two voices, Eleanor and Chanel aka Leni and Nelly.

Leni, Nelly and the other main teenage characters are all top high school athletes, cheerleading and football. They live in a world that is relatively free of color prejudice and antisemitism, though when Nelly, who's Black,* doesn't  get a position she had expected, she blames color discrimination. I saw other reasons in the narrative.

Three, the nickname of the local high school football star, develops a relationship with Leni after they unexpectedly meet outside the sport physical therapy clinic. There never seems to be an issue/problem that they're different colors and religions. Objections only come from Three's parents who don't want any girlfriend to distract him from their plans for him. Three's their last chance to have a son be a star in the NFL, and before that he must get into the best possible university team. The various ambitions the parents have for their children is a subplot.

Conflict in Why We Fly concerns whether or not to kneel during the national anthem, which was a major issue a few years ago in the United States. Unless I missed it, everyone agrees that there's racial injustice which supports kneeling, but the school administration opposes kneeling. And some of the parents and kids are afraid that kneeling will blacklist the participating student athletes negatively affecting their futures.

Now I'll speak as A Jewish Grandmother. Even though Leni and her family are involved in their local Reform Temple, intermarriage with a non-Jew isn't an issue. I've seen the rate of intermarriage rise in my family and friends in the United States, even among those who attended Jewish Day Schools. I "voted with my feet" when I was in high school. I became Torah observant, Orthodox as it's called in the states, and also became a Zionist. My husband and I made aliyah (moved to Israel) two months after our 1970 wedding.

The blurb/motto on the book cover of Why We Fly is:

Don't just stand on the sidelines.

I've never stood on the sidelines. It's not my nature. Maybe that's why I could so easily relate to Leni and Nelly. But as A Jewish Grandmother I wish that Leni's rabbi taught a Judaism based on Jewish Torah, Law and Lore rather than Progressive Liberal Ideology.

Honestly, I didn't mind being out of my "comfort zone." To be honest I really enjoyed getting to know today's America. I'll repeat that Why We Fly is a well-written book.

*Black, capitalized, is used in Why We Fly. I checked while writing the review.