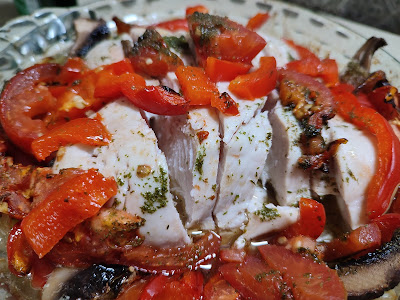 Let's start at the very beginning....

A couple of weeks ago there was a sale on "chicken breasts" in our local supermarket, so I bought a couple of packages. A lot of people use them to pan or "oven fry" as schnitzels, but not me. Quite often I separate them and cut and bake with lots of vegetables, sort of like "stir fry," but neither stirred nor fried. In the meantime, I stored them in the freezer.

As our table was "filling" with expected guest for Shabbat lunch, I realized that I had to cook something else as main course for me and my husband for Friday Night. Friday morning I took the "chicken breasts" out of the freezer to thaw planning on cooking just enough for the two of us. As the cooking deadline approached I realized that the chicken was still frozen solid. I managed to break off half, but they fillets couldn't be separated at all.

I put the "chicken breasts" in a glass-like baking pan, so I'd be able see if it's cooking later on. I added onion, tomato, red pepper, mushroom plus a bit of oil and coarse black pepper. Covered with foil it started baking at 200C with the heat coming from below. After I could see bubbling "oil" I switched the oven heat to "top."

Once I was almost 100% certain that it was fully cooked I took it out of the oven and sliced it to check that it was white and not pink. If it had looked raw, I would have returned it to the oven for more cooking.

My low fat chicken was super tasty, and since I had cooked more than needed, we have a couple of servings left over.