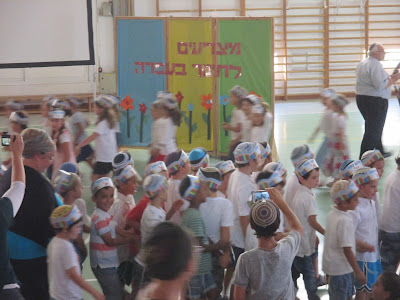 
In various articles I've read about the opening of the new school year here in Israel, NRP aka Jewish Home's Education Minister Naftali Bennett's aim is "excellence" in education. That's nice, but I don't think he's going about it in the right way. If I've understood correctly, in recent years, the Ministry of Education has forbidden doing the the Mathematics and English Bagrut (Matriculation exam) in the Tenth Grade. They want the students to continue studying the subjects more years, which makes sense, but what they do by that ruling is actually "dumbing down" to "very good" rather than raising the level to "excellent."

High school students should be studying those basic subjects until the end of their senior year, 12th grade, but those who are capable of passing the highest "5 point" test in 10th or 11th grade should be given the chance, and if they pass, they they must take higher level courses. That's what my eldest did when she was in high school. A group of parents pushed the school to allow their English-speaking daughters to take the test in the 10th grade, and then in the 11th grade they took an extra, 6th point, English Literature course. That excellent high level course opened up a whole world of knowledge and interest, which led to her majoring in the subject in university.

My second daughter also did a number of her Bagrut tests early, including English in the 10th grade, and found herself in the position the Ministry of Education wants to prevent. She had almost nothing left to study as a senior. At least her high school allowed her extra Jewish Studies in a neighboring seminary for women. This was before today's easily accessible internet and "elearning."

If the Ministry of Education really wants "excellence," then they should encourage the gifted students to finish the basic 5 point exams earlier and provide higher level classes for them until they finish their "twelve years of studying." These classes, when there aren't enough students or suitable teacher in a school, can be via the internet.

The other day, I saw a news clip about how the children of Chabad families all over the world study in "classes" via the internet. In some cases, the children have to be up in the middle of the night, because of the time differences. So, here in Israel, this wouldn't be a problem. Even gifted and motivated students in the smallest schools can study on a suitably high level.

A "Teudat Bagrut," high school diploma, of such a student with high level tests and grades allows the student automatic admission to university in majors related to the subjects passed on a high enough level. That means, no Psychometric Exams and courses required for those subjects.  That's a big time and money saving for those high level successful students. My third got into university like that, and ended up finishing her Master's Degree simultaneously with her Bachelor's.

Things are always changing in Israeli Education. One "reform" is replaced by a newer "reform" ad infinitum... If they want excellence, my suggestions should be implemented.
Posted by Batya at 9/04/2016 07:14:00 AM