We don't have a car, so my traveling is a combination of public transportation and rides, tremps, the Israeli word for hitchhiking. I also call it siyate d'Shmaya kaful, a double dose of the hand of Gd.

Unlike the lies you'll hear in the international media, anti-Israel NGOs etc, there's no apartheid in Israel. Jews and Arabs travel together, at least on Israeli "Jewish" public transportation. You won't find Jews on the Arab buses.

In the afternoon, buses to Ariel from the "coastal plain," Tel Aviv, Petach Tikva, Kfar Saba etc are packed with Arabs. I've seen buses speed past bus stops many times, while Jews and Arabs stand tired and frustrated waiting for a bus that will take them on their way. The Yarkon Junction is one of the most difficult places to get a ride on a bus during that busy time. I've had better luck at the Oranit/Elkana bus stop off the main Cross-Samaria Highway. But that doesn't mean that I can easily get into the bus and find a seat.

The last time I needed to get home via Ariel, a bus stopped there to let a couple of people off, but at first wasn't going to let anyone on. Then the driver saw that there were just a few of us, so he opened the door and asked where we needed to go.


I answered: "Ariel."
So the driver replied: "Pay me and then go in through the backdoor."

That's what I did, sort of. I paid him, and then walked to the back door. He opened it. I could see that the back of the bus was packed with Arab workers. I had already paid and had no doubt that the next bus would be the same if not worse. So, I stepped up and sat on the step. It sure beat standing.


A minute later I felt someone tap me on the shoulder, so I looked up. "There's a seat for you."
"Thank you," I replied.

A few minutes later, at the Gitit Revava bus stop, the bus emptied almost entirely. That's where most of the Arabs get off. There were just a handful of other passengers traveling to Ariel, where I got a ride home, thank Gd. 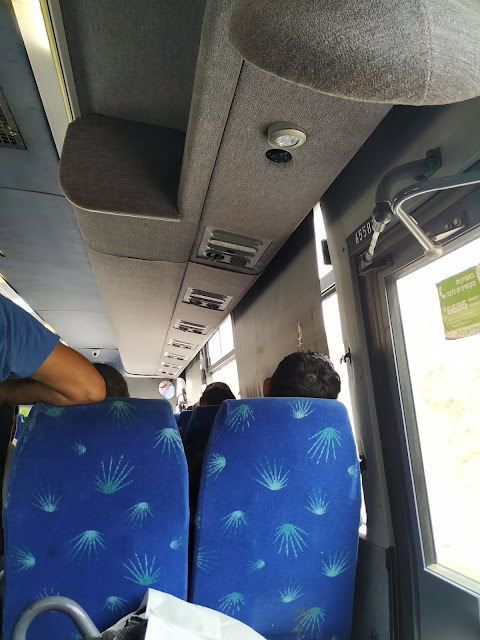 Batya, this was a very interesting post And may I add that your grammar is impeccable and you never have a typo. See you soon!Emily

Nice to read this reality

Batya, write a book on your various travel adventures in Israel.. it would really make a good read.. now...

From your travel adventure on the public transportation, this is what i perceived, there are good and bad in every nation.. caring and uncaring.

Thanks for all the kind words.

This sounds utopian. Has your experience always been so positive on the buses to Ariel. I have heard of quite a few cases where women fell threatened by the Arabs on these buses, and of cases where they were actually assaulted in some way.

It's so important that people hear stories other than the anti-Israel or anti-Arab screeds. Kol hakavod, and thank you. We also have chosen to be car-free; and my fellow passengers include sweet and thoughtful Arabs as well as Jews in the crowd of tired people who just want to get to their stops.

Thanks Ruti, real life is frequently more pleasant than many imagine.