Good Thing I Got To Try SHEVET's Wee Laddie Again 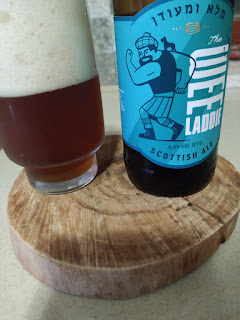 A couple of months ago, I bought and reviewed SHEVET's Wee Laddie Scottish Ale and was disappointed. Yes, I gave it a bad review on this blog. A lot of people were shocked, because they insisted that the beer was really good. Maybe I had just gotten a "bad bottle," or the store hadn't kept it stored properly.

In response SHEVET decided to send me a small gift selection of their beers, which included Wee Laddie. I've already reviewed the other three, SHEVET IPA, SHEVET Iceman Beer, SHEVET Imperial Stout, and now it's time for Wee Laddie.

Even though I poured it as carefully and "professionally" as possible, there still was quite a foamy head, but the aroma was inviting. That was a very good start.

It got better. The beer in this bottle of SHEVET Wee Laddie was strong, fruity and tasty, a real beer. This was the ale I had been looking forward to drinking when I had bought that first bottle.

Now I can honestly say that SHEVET's Wee Laddie is a great beer, and I'm looking forward to drinking it again. 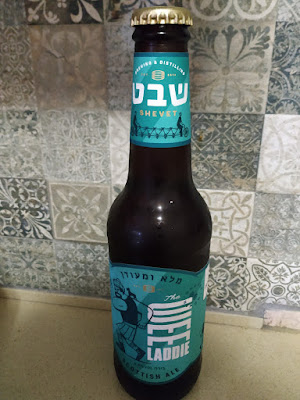 And if you drink it a third time -- you may perceive something completely different!