Yesterday when my friend and I were walking around center/downtown Jerusalem, we needed an early lunch. The numerous Alma soup stands caught our eyes. Neither of us had ever tasted any of the Alma soups, considering that the weather beginning to chill, hot soup seemed perfect.

The hardest task was choosing a soup. As you can see, there's a great variety of parve vegetable/lentil/bean soups plus meat/fleishik kubeh* (kube/kubbe/kubbeh) soups, which also have a lot of vegetable. 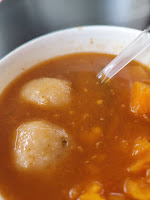 Since we both follow the principle of not ordering out what we make at home, we chose kubeh soups. My friend chose the beet, and I chose pumpkin. Usually I find restaurant soups much too salty, but mine was perfect, and my friend also enjoyed hers. We sat outside at one of their tables, which was very pleasant. Jaffa Street has become very peaceful since the lightrail now travels on it instead of buses, cars and taxis. 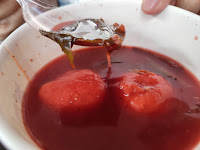 Alma soup stands are at a number of locations along the main streets downtown. We definitely recommend it. Which is your favorite? Please let me know in the comments.
*I consider kubeh to be the most accurate spelling, since it's pronounced with a long "u" and short "e." For those not familiar with them, a kubeh can be considered an Iraqi dumpling, kreplach or wonton.
Posted by Batya at 10/19/2021 02:57:00 PM