Making Meaning Out of Madness: A Jewish Journey, Book Review 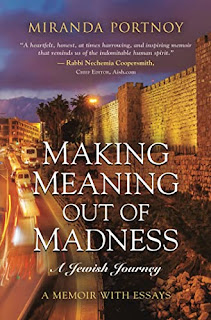 Making Meaning Out of Madness: A Jewish Journey by Miranda Portnoy is a memoir, though written in a penname, plus some additional "disguises."
Miranda Portnoy writes of her very difficult childhood in a dysfunctional Jewish American family with a physically and emotionally abusive mother and difficult father, who eventually left them. Portnoy is closest to her grandfather, but is unable to save him from her father's systematic and eventually fatal abuse. It's made even worse, because the authorities refuse to believe her.
Despite her toxic family, being taken advantage of by her longtime lover and a vicious conspiracy against her at the university, Portnoy somehow manages to escape to Israel where she survives and thrives as a Torah observant Jew.
Portnoy's story is one of those that sounds too amazing to be believable fiction, but it's true.
During Portnoy's difficult times, she did find people to help her, a professor who introduced her to Torah Judaism and various therapists. She was even hospitalized at one point; that's how bad things had become.
I found Making Meaning Out of Madness very readable. It's a well-written and compelling story even though the narrative sounds like a "horror story." I don't like the horror genre and rarely finish such books. Portnoy's innate strength comes through the writing even when telling of her most difficult times. She doesn't give up or give in to the demons who plague her.
Portnoy's life eventually turns around when she starts observing Torah Judaism, moves to Israel, and after one failed try, finds the perfect women's Torah seminary for her needs. It's a fairy tale ending when she's introduced to an amazing man and they marry.
Besides protecting herself by changing all identifiable names, Portnoy isn't shy about letting us know how horrendously difficult her life had been. I highly recommend Making Meaning Out of Madness. It's wonderful to read such a great survival story.