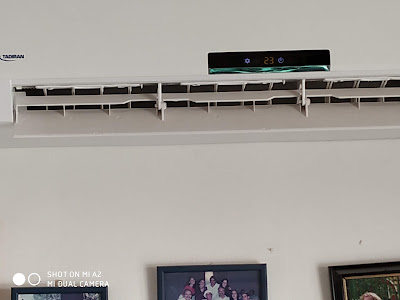 I still have no doubt that we're among the very last in Israel's cold mountainous region to have gone modern and gotten an airconditioner for heating. Since we never replace anything while they still function, even poorly, it took us a pretty long time to make the splurge. This is the first full winter we've had it.

On the whole I really love heating the livingroom, plus kitchen and dining area with this airconditioner. The big bonus is that I can set up the folding clothes driers and get the clothes perfectly dry, too.

We hardly used it in the summer for cooling. One reason is that the heat doesn't bother me all that much, and the other is that we renovated the kitchen and had the fridge plugged into that socket, while the work was done.

We've tried to remember to clean the filters, though it's hard to know just how often...

A few weeks ago, I began to notice that periodically the AC would stop, and the little screen would say "HI." After it didn't go back on, within what I considered soon enough, I did an "experiment." I pulled out the plug and then after a couple of minutes, plugged it in and it worked. Then that happened on Shabbat when it's forbidden to play with the plug. So, I waited and eventually it went back on.

So, on the other day, in the midst of the cold stormy weather, when my husband reported that it had stopped and showed "HI," I told him not to worry, even though the AC had been making lots of noise, sounding like a hovering helicopter. Then he reported that only cold air was coming out. So I told him to pull the plug, and he turned it off. A bit later, we cleaned the filter. It was the filthiest I had ever found it. Actually, for the first time it really looked like it needed a cleaning. But I was afraid to turn the AC back on.

The following morning, since we had paid for extra  service, I called Tadiran and told the woman who answered about what had transpired.


"Did you clean the filter?"
"Yes, we just did."
"So, turn it on."
"Really? I had been afraid to."
"No need to be afraid. Tell me if it heats up. It may take a few minutes. And don't worry about the HI. It just means that the AC is defrosting itself."

That's it, thank Gd. Now I know two new things about our AC.

No one that knows either of you can thing you are dummies! Not everyone is technically adept, that's all.

Thanks, but I really thought the ac had died an early death. I hope this post assists others, who are like us.