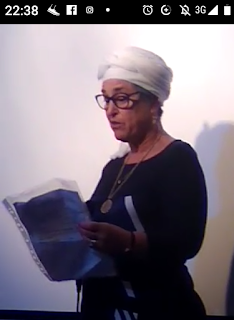 A few weeks ago I took on a challenge. The Women's Performance Community of Jerusalem asked for volunteers to present poems or statements/short performances about Freedom. I decided to write something and send in my "audition." It was accepted, thank Gd.

My poem was written in "free voice" form and probably works best performed, rather than just read from a page. My friend recorded/filmed my performance  on her phone last night. She knows who she is and I thank her. Two of my close friends came to cheer me on, which made the event even more special. And many others including family apologized for not making it.

Freedom, as I described it, is rather different from the other performances. Since this is a women's theater performance group, I'm not featuring others in this post, since many of the women don't perform in open, mixed venues.

Of course, I'm curious about what you thought of my poem "Freedom."

Hi batya, as english is not m'y mother's tong, could you send me thé written form. Happy birthday. חנה .

I enjoyed it very much Batya. And I got a kick out of the last line, "Feel free to disagree!" Shabbat Shalom!