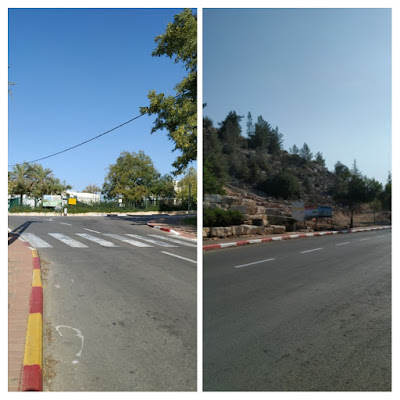 Friday morning when I left home to catch a ride at the Yarkon Junction, I was very optimistic that I'd be on time. Usually I am. I got to Ariel, near the university with time to spare, so I decided to go to the nearby mall and use the loo. Blog post on that, Gd willing, in a few days.

As you can see from the above photo, there's still a dangerous "under construction" sidewalk of sorts along the main road to the mall. Whenever I've found myself walking in the dangerous mess over there, I think that Ariel Founder and Mayor, the late Ron Nachman, Z"L, would have made sure the sidewalk was safely completed before the stores had opened.

Not wanting to walk on the rocks and along the road in the direction of traffic, I crossed back to the bus stop I needed far from the "crosswalk." 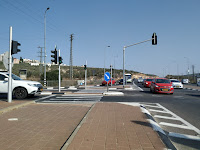 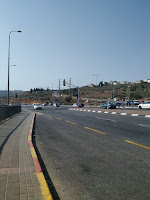 Unexpectedly I discovered that it would be at least fifteen minutes to a bus, which meant that I'd be cutting it close at best. Davka, I didn't check in advance and chose the time of the morning with the least buses.

Of course, the bus was late, and a dozen or more people got on. Some of them with travel bags, which the driver insisted should be put under the bus. When one of the passengers with a bag on wheels sat in the front and looked totally blank and uncomprehending at the driver's request to sit in the back, I spoke to the man in English. Thank Gd, I guessed correctly, and he took himself and his bag further back.


Of course I updated my ride that I'd be late.

I'm glad to have discovered that bus routes in Ariel have changed. I don't know if it's all the buses, or just the ones I went on, 186 and 86, if I remember correctly. They now take the new bypass road at the Rami Levi Mall. This makes it easier to get to those stores. That means there's less bus service to the old industrial zone.

Luckily it didn't really matter that we were "later than planned" to the event we were going to, because there was no formal program.

Going home, I was dropped off at the Yarkon Junction and got a ride to the Gittit (Revava) Junction. There after a short wait, I caught a bus which took me to the Ariel University. I got off a stop early, so I could walk a bit. Then I got a ride with a neighbor.

And I managed to finish everything necessary at home before Shabbat. That's pretty good, since it was one of the "shortest Fridays" of the year.