If you didn't make it to The Jerusalem Beer Festival last night, you can still go tonight. It's best to buy your tickets in advance, less expensive and then you won't get disappointed at the door if it's sold out.

This year, all the beers I sampled were great. Two years ago at the Jerusalem Beer Festival many craft beer companies had been experimenting with "flavored beer," which I found mostly awful. I had even titled my post about it Where's The Beer?" Jerusalem Beer Festival 2019. Now as the world, including Israeli craft beers, is struggling to survive corona/COVID, my guess is that they don't have the "profits" to invest/waste on experimenting with unusual flavors in beers.

You can't see it in the photo, but Doug is wearing the same sort of T-shirt I wore. We were part of a team promoting his blog and expertise in Israeli craft beers. 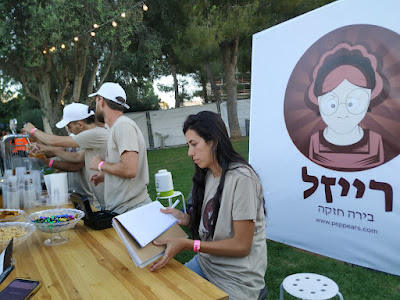 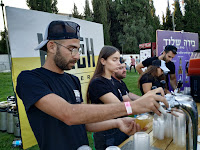 On the whole I requested IPA samples from all the craft beer stands offering "tastes." I'd rate them all from good to excellent, some more fruity tasting than others. IMHO the quality of Israeli craft beer has gone up. There's lots of competition. I didn't make any attempt to sample the foreign beer. Honestly, there's a limit to the amount of beer I can drink, especially when it's the same evening not from the same source. And Shapiro's "whiskey beer" was really powerful.
I hope you make it to the festival or one of the others happening in Israel. If you can't try to buy Israeli craft beer. The "little guy" is producing fantastic beer.
Posted by Batya at 7/22/2021 04:01:00 PM