Sudden Return to Tremping AKA Hitchhiking, Let Me Tell You About It

There was a time when most of my travelling was by tremping AKA hitchhiking. Our bus service has never been all that great, and being "car-less," I had no real choice. It's either tremp or:

In recent years a few things have happened to keep me on buses:
But there are times when the idea of standing around and waiting for a bus takes too much energy. And I can't sit, because what if someone is driving by who would have given me a lift if he/she had seen me waiting.... Honestly, I'm not the sitting type.
Late, last Thursday night was one of those times. My daughter had driven me as far as Ofra, where she lives and I'd been following the progress of the bus on the app efobus. It was due in about 20+ minutes, so I planned on going back into Ofra five minutes before its arrival, if I didn't find a ride.
There was a soldier at the hitchhiking post, and when he saw me, probably three times the age of other trempistim (hitchhikers,) he immediately offered to help me check out the drivers offering rides. But in the end, he was amazed that some of those who stopped knew me by name, and I ended up getting a ride with someone I had once worked with. So, thank Gd I got home quite awhile before the bus, which doesn't go directly to Shiloh.
Then the next morning I had a much more complicated trip. I had originally checked it out and was confident that I could get to the large bus stop on the way to Elkana by taking the bus to Ariel and then transferring to another. That was before I discovered that there'd be a marathon in Ariel. Bus service inside Ariel wouldn't be back to "normal" until an hour or so after I needed to get to my destination. 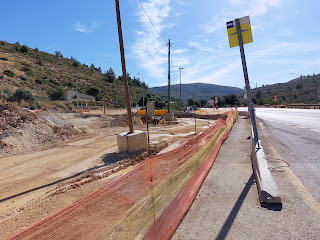 I had no choice. I had to tremp or not go to our friend's azkara, memorial. Yes, I decided to hitchhike.

I walked to the main Shiloh bus stop, but nobody was going in the right direction. Finally I got a ride to a better corner. From there it took awhile until I got a ride with somebody going to Eli. Waiting on the road outside of Eli isn't all that great, but I felt that I had no choice. As you can see, there's construction going on, though not that day. They're changing the junction and probably adding traffic lights.

It took quite awhile for me to get a ride. Actually  I was about five minutes from crossing the street and trying to get home. 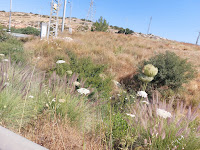 Someone was going just a few kilometers past where I needed. We bypassed Ariel because of the marathon. There were no buses on the road as we drove, which confirmed my suspicion that tremping was the only way for me that morning. Then I walked down to the place I'd be picked up for the azkara.

Going back home I had to do the trip in reverse, but there'd be bus service to/from Ariel. As we were driving to the bus stop, I realized that at best I'd just miss the bus home. But after all of my successful tremping that morning and the night before, I felt perfectly confident.

I checked the app and saw that there was an 86 to Ariel expected in a couple of minutes. I got off at the first stop in Ariel and then realized that those shopping and then driving to Shiloh wouldn't see me. The parking lot exit is further on. I should have gotten off at the next stop. So I began to walk there as quickly as I could, even though the air on that sidewalk was full of construction dust/sand. Suddenly I heard what could have been someone calling me. I stopped and turned around. It was an old friend. He asked what I was doing and then offered to take me to the last stop in Ariel, near the university, where it's easy to get a ride home.

So, Baruch Hashem, in a short time I was on my way home. Because the bus goes through Eli and then Shvut Rachel before it gets to my neighborhood, I actually got home before that bus I had missed passed my house.

Gd's Great for sure. He took good care of me when I needed those rides. Baruch Hashem.

In case you're wondering, I'm not reverting to tremping over the buses. But it's nice to know that it can be done, when Gd wants it to happen.