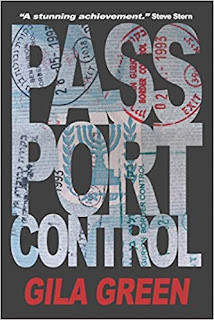 Passport Control by Gila Green is an amazing book with lots of plot twists and mystery. It tells the story of a Canadian Jew, Miriam Gil, who comes to Haifa University to study. She gets involved with many unexpected people and events. Passport Control is fiction, but to be honest, it's clear that everything Green writes about is a real possibility.


Miriam Gil knows little about Israel. Her father won’t talk about his life there or the brother he left behind when he came to Canada. Hurt and angry when he tells her to move out to make room for his new girlfriend, she enrolls in an Israeli university. She falls in love with Guy, a former combat soldier who dreams of peace. Miriam is caught off guard when her visa and passport application are rejected on the grounds that she’s suspected of being a Syrian Christian. In rapid order, the university boots her out, her one friend is killed in a brawl, and Miriam is accused of murder by Israeli police. Despite troubling revelations about her father’s past, Miriam must reconcile with him if she is to prove her innocence, reclaim her life, and hang on to her new found love.

I've been in Israel for close to half a century, and nothing surprises me. Even though I've never studied in an Israeli university, I can see how a naive Canadian student can find herself in the situations that Green places Miriam Gil. There is a lot of material about the Israel of a few decades ago, which is so different from Modern high tech Israel.

Reading Passport Control is a good way to learn about what Israel was once like. I highly recommend the book and truly enjoyed reading it. It's suitable for older teens and adults.

Some things have changed so much in recent years, but I think that nowadays there's even more contact between Jews and Arabs, especially in Israeli universities. Foreigners would most probably be shocked at how much integration there really is.


Gila Green is an Israel-based Canadian author from Ottawa. Her father is a Yemenite-Israeli immigrant to Canada and her mother is a third generation Canadian. She has lived in Winnipeg, Vancouver, Johannesburg, Jerusalem, Haifa, and Tel Aviv. She works as a freelance writer, editor and online creative writing instructor, as well as an EFL college lecturer. Gila is the author of Passport Control, White Zion (a novel in stories forthcoming from Cervena Barva Press 2019), No Entry (forthcoming from Stormbird Press, 2019) and King of the Class. Her stories have been nominated for seven international awards and have been published in two dozen magazines and anthologies including: The Fiddlehead, Terrain.org, Jewish Fiction, Fiction Magazine, Many Mountains Moving, The Dalhousie Review and The Saranac Review. Gila writes often about racism, alienation, dislocation, war, family relationships, pre-State Israel, modern Israel, and more recently about a murderous poaching ring in South Africa's Kruger Park. Gila is the proud mother of five children.

You can order a print or kindle version from Amazon: