Last night Jerusalem "Big Blue" Lions, reigning champions for the past two years, showed its superior... everything... in the semifinal game against the Tel Aviv Pioneers. Big Blue won, 47:8. Just two years ago, Big Blue had met the Pioneers in the finals, a game that could make a great movie screenplay. In that legendary game, Big Blue was behind until they started inching forward in the final, fourth, quarter. Until then, it looked like we hadn't a chance. Then, only six, yes 6 seconds to the end of the game we tied them. The crowd went berserk and could hardly be held back. We beat them in overtime, yes, just like in the movies.


Last night's game was different. This season's Pioneers aren't the same team that we played against in 2017. They started pretty well, but couldn't keep it up for the full four quarters.

There was a nice supportive festive atmosphere in the stands watching the game. The fans are a real mix of Israeli society, as are the players. And there's a wonderful feeling of family, too, among players and fans.

The Jerusalem football games take place in the Kraft Family Sports Campus, under the Ramot Junction. BTW, the Kraft who donated money for the fields is Robert Kraft, owner of the NFL Patriots which just won the Super Bowl.  BTW#2 Head Coach of the Jerusalem "Big Blue" Lions is my son. I can brag, right?

Next week is the Finals of the 12th season IFL Tackle Football. Yaala, BIG BLUE! 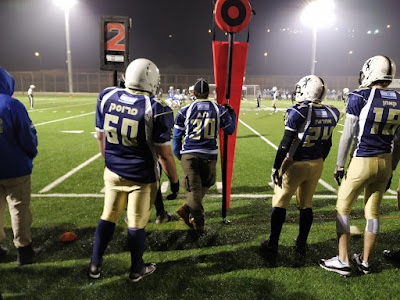 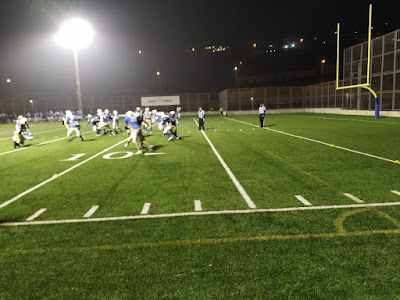 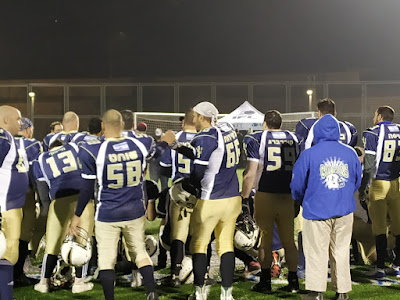 Last year's finals against the Petach Tikva Troopers. There's a good chance that we'll be playing them again, next week.