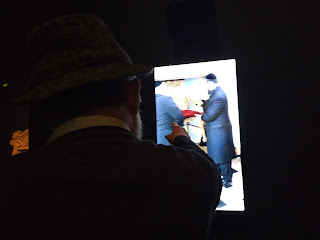 Tuesday evening I was privileged to attend the opening of the new exhibit in the Israel Museum, Seated in Seclusion: Bratslav Hasidim and Contemporary Design. It's a photography exhibit of broken chairs in isolation symbolizing the popularity of the prayer in seclusion among followers of Bratslav Hasidim.


Hitbodedut – self-secluded prayer and introspection – is practiced by Bratslav Hasidim in forests throughout Israel. These Hasidim use the salvaged parts of old chairs to create “new” chairs for this very purpose. Rabbi Nahman of Bratslav (1772-1810) believed a regular practice of hitbodedut was perhaps the most important element in one’s relationship with God. In this state the Hasid addresses God directly, sharing his most personal prayers and thoughts without the mediation of a prayer book or synagogue, as he strives to achieve spiritual affirmation and restoration. (Israel Museum)

The most famous of the Bratzlav chairs is the one that had belonged to their rabbi, Rebbe Nachman. A few decades ago the chair was clandestinely sent to Israel, in pieces. The carpenter chosen to restore it was Catriel Sugarman, who at that time had a Judaica woodwork workshop on Shlomzion Hamalka Street, Jerusalem. He and his wife happen to be old friends of ours.

Curators of the museum exhibit contacted Sugarman and brought him to the synagogue where the chair is now located. They filmed his examination of the chair, reminisces, his descriptions of what he was given to work with and what he had to recreate. A short movie of that visit is part of the exhibition, and that's where we spent our time.


I must visit the exhibit another time to see the photographs and replicas of the broken chairs in situ. Yes, I do recommend seeing the exhibit and others in the Israel museum.

As part of the exhibition opening there were some speeches and a wonderful performance by Shuli Rand, a popular chassideshe singer and actor.