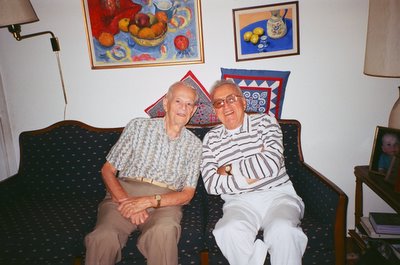 and now for...
HAVEL HAVELIM!!

There are eight days in the Chanukah holiday, and it takes eight days for me to "do" a Havel Havelim. This will be presented in "diary form" from today, Sunday the 25th of December, or the 24th of Kislev, and G-d willing, I'll complete this one week from now on January 1, Rosh Chodesh Tevet.

Day 1
Even before Soccer Dad and this week's host, Daled Amos, have presented this week's edition, I'm already hard at work writing the introduction. I also cleaned out the old "hh" mailbox in my yahoo and even added a few new posts and links. Since my last edition I've been adding to my email list of bloggers, and as soon as this week's is out, I'll send a reminder to everyone.Let's start with something cheerful. If you haven't seen this, now's the time!

First prize for the very first submission goes to Crossing the Rubicon2; yes it's just perfect to open the show. I promised Arlene Peck that I'd post her when she opened a blog, so read her latest.If you're still looking for easy-to-make sufganiyot…they really are easy.Yes, there was a Judah Maccabee, and if you have any doubts, ask Blog d'Elisson.I blogged in the morning, and I blogged at night, day one.

It's a cold morning, but there are a couple of hh posts in my mailbox, so here goes:
Food for thought from Irena, of the The IgNoble Experiment, a.k.a. Live Dangerously!,
The Sin of Expulsion: discusses Uzi Landau and the Moshe Feiglin Likud fan club.
Winter, in the eyes of Reb Chaim HaQoton.All caught up (but fingers are frozen) and time for a hot shower! I like this diary method, very efficient. I first saw it in another carnival. As it's said in Pirkei Avot, Ethics of the Fathers, we must learn how to learn from one and all.
Help Save a Life! Neshama is a Jewish website that promotes organ donations to save lives. Recently my friend Judith bat Tzippora received a kidney, a gift from a live donor. Refuah shleimah to all of those in need and to all those who donate.
A Current Window gives us Chanukah and Three Layers of Darkness. Jameel tells us about Erev Shabbat Creations - What the Godol Hador Never Addressed and the Muqata Mystique.
My husband, who's in sunny England, tells us about Limmud. Considering how little sun we've had the past few days, who can tell where we are?
This isn't really a blog, but I thought that Israeli home owners would like it.
Heichel HaNegina sings Chanukah. Multiple Mentality reflects on a visit to a reform "shul" for a family simcha.
I blogged in the morning, and I blogged at night, day two.
Day 3
Just a quick start before a "savta day," when I'll accompany Porat and her abba to Jerusalem for errands.
For this second day of Chanukah and third day preparing Havel Havelim, I'll begin with Soccer Dad's reflections. It's a beautiful post, and now I have to pack; G-d willing, I'll resume this later in the day.
After lighting the 3rd candle, or small "pot" of olive oil.
It's just the time to read Irina's Chanukah story.
Yaakov Ish Tam gives his spin on our enemies
Adloyada gives us two posts about Chanukah in London.
And here's an interesting shiur about Disengagement from Yeshivat Beit El, the Arutz 7 one, not the one in which I teach English.
In the Orange Revolution, there's an interesting post about the Clash between religious, secular not a modern-day Chanukah .
Not Quite Perfect made two perfect Chanukah graphics, and I have a feeling if you check, there will be more by the time HH is posted.
Elie's Expositions shares another sad milestone after the death of his son.
Katif.net is still being updated, so you can keep posted.
Faith in Nathan praises the new immigrants from North America and writes about North American aliya in general.
Smooth Stone makes a very good point that in 1948, the State of Israel wasn't created, it was restored! Thanks, Smooth.
AJHistory by Menachem Butler gives us Samuel Belkin's application to RIETS.
Read Almost Supernatural's report on Nitzan where the largest group of Disengagment victims live. And here are a couple of pictures taken in Ir Ha'Emunah of the kitchen and kiddies.
It has been a long day. I blogged in the morning, and I blogged at night, day three.

Day 4
Another day, another morning, and I'm frozen! Why did I have the heat go off at night? So as my coffee freezes in the cup, I'll give you something that's not really a blog, The Dishonest Reporter 'Award' 2005.
If you haven't seen Kumah's aliya "film," here it is.
And another post from Heichal HaNegina. Here he discusses the sanctity of "negina." This diary format encourages multiple posts from bloggers, since I just add as I go along, rather than choosing. As a frequent blogger, I really see its advantages.The hh mailbox is empty, and I have time, so I googled Chanukah blog. Most of it's not quite what I wanted, but I like these photos and the Forest's Chanuka song. And Sue gives us Adam Sandler’s Chanukah Songs. And don't forget the classic Dreidel Song, thanks to Mama Lisa. It's amazing what you can find on the net. Now I wish I knew why my Word spellcheck conked out and how to get the google toolbar back, which had a good spellcheck.
More Chanukah music from Jewish Dayton; bookmark it for next year.
Kever Rachel, laundry and dishes await me, so I had better save this and get back to the mundane.
After lighting the 4th candle, or small "pot" of olive oil. I turned on the computer and found a letter with this link showing pictures of Chanukah candle lighting in the FSU. Please forgive, since it's not a blog, but it is Chanukah.
Shark Blog teaches us Political Science. And History News Network offers Deja vu -- Judith Apter Klinghoffer.
"Shining full plate…." reports about Tony Kushner on Munich.
Judith of Kesher Talk presents an illustrated and detailed Chanukah post.
Avodah Ivrith shows how there's no free speech in Israel. Cosmic X writes about dovening at dawn, my favorite time of the day.
Dry Bones attacks Spielberg's Munich, in his very special way.Deja vu from A Very Heavy Stone.
Shemitta Rediscovered asks the Rabbanim to speak out.
And I'll end tonight's efforts with condolences to Ezzie's wife's family on the death of her grandfather, Dr. Abraham Luchins, Z"L.
I blogged in the morning, and I blogged at night, day four.
Day 5
And a good morning to you, too, though the sun hasn't yet risen. I've already checked my mail, and there's lots waiting for inclusion in this 51st edition. We'll start with a good question, "WHAT DOES PEACE MEAN?" by Israel Zwick, on Isralert.
From Smooth Stone, Dispelling the lies of palestinians: more photos of the Temple Mount (1922) and the good news that Campaign to Divest from "Palestine" is a finalist in Best New Blog in the JIBs. Different River laments what Bar Mitzvahs have become for some with more money than sense. Contrast this to the Bat Mitzvah in Kever Rachel.
There's a new blog, Qesheth Yonathan, and it tells of a different sort of Barbie Doll.
The Sin of Expulsion is full of news and commentary.
Back home after a very moving day.
And here's a very unique chanukiya from Everyone knows this is Nowhere.
It's late and I'm tired.I blogged in the morning, and I blogged at night, day five.

Good morning. It's Friday, and we're getting towards the end of creation, creation of #51 that is. I requested that posts be sent to me before Shabbat, so I could have it mostly complete by then. Of course, I also have to look for some new bloggers. And I found an "olah chadasha," new immigrant to Israel. Read about Yael's adventures.

And for More on Munich read Jewish Current Issues.

Mirty has Mixed feelings about Chanukah. Did I spell it right?

Ezzie tells us about the new blog for Jewish professionals.

Jewschool takes us to a wedding.

Jameel spends some quality time with his daughter.

Ben Chorin tells us about an evening with Nobel Prize Winner Prof. Aumann.

If You Will It, it's a small world, and read his daily Chanukah diary. Celestial Blue notices some unpleasant things happening in Israel.

Joe Settler takes us to an illegal outpost.

And since the Rock of Galilee is gathering no moss this Chanukah, where should they light candles?

I agree with westbankmamma in that we are giving our kids childhoods that resemble the middle of the previous century, like when I was raised. And I think that it's wonderful!The Balabusta in blue jeans mentions that her husband takes his latkes with ketchup. It reminds me that my daughter was horrified to see her 9 month old baby grab and gobble up a greasy latke at the Betar Reunion. Even worse, she grabbed it from my hands. Bad Savta Batya!

Shaister tells us about the Avengers, who are now in their eighties. Read what they did when much younger.

And I had better get back to the kitchen and laundry and other Shabbat preparations.


Two washes on the line
and another in the machine,
so it's time to get back
to Havel Havelim!

One of the newer bloggers is well-known Jewish writer, Chava Willig Levy, an old friend of mine. Her grandmother, "Bubby" Willig, was a neighbor of ours in Bayit V'Gan, Jerusalem, and during that time we discovered that Chavie's mother and mine had been friends in high school.

Israel Perspectives gives his opinion about the Labor Party campaign.

And now, before I return to the kitchen and Shabbat preparations, here's A Simple Jew on being a father.

Check out the Orange Revolution! And a way of saving a life!

I blogged in the morning, and I blogged at night, day six.

I just got back home and I found a lot of "last minute" posts, so here goes:

Daled amos tells the truth about the "truce."

A whole slew from Ezzie. A couple I may have already been included, but I don't have time to check. It's faster to just put them in again. One, and another about his late grandfather-in-law. About auctions and raffles by SIL. Abbas' hypocrisy and two Chanukah posts. Thanks Ezzie, and will I meet you at the Ben Zakkai dinner?

Something about women from Jameel.

And four just arrived from Israel Perspectives; I don't have time to read them to choose, so I'm linking them all. One, two, three, and four. Judeopundit spins about the "border incident.

"I guess Mirty's hankering to host another, being so helpful and all. She sent me this from the NY's Funniest Rabbi. And one from herself and one from Gil's Hirhurim "musings," Who can retell?A Simple Jew provides questions and answers.

Send your links for the next edition via Conservative Cat’s handy form, and at the same time you may discover other “carnivals” to visit and enter. If you want to host, then contact Soccer Dad at dhgerstman at hotmail dot com.
This appears in the UberCarnival
Please put up a blurb on your site alerting readers to Havel Havelim.

Mazel Tov on being honored by NCSY. I met my wife through NCSY 20 years ago.

Thanks, and I wonder how many other NCSY'ers are blogging.