For the longest time, I totally avoided and looked down on "extreme" photo-editing. I was raised in the film photography world and was always warned by my parents that it was a waste of money to develop and print bad shots. I had one chance, and one chance only, to click and produce a perfect photo.

So, as you can imagine, it's rather traumatic to accept the digital photography reality in which people may take dozens or more shots of the same scene. Trying to choose the best, after three or four, my eyes go foggy and I just can't see what's better or worse. I'm not a visual perfectionist. The truth is that I'm just not a perfectionist at all!

Now I must admit that even though I highly doubt that I'll be taking more than a handful of photos of the same scene, I have not only discovered the fun and art of photo-editing, but sometimes I fear that I'm addicted.

This week's 52Frames challenge was to use our phone as a camera. To be honest, I've been using my phone pretty much every week for months. Its pictures are far superior to what my cheap camera can produce. That created a bit of a dilemma. I needed to submit a photograph that would be a superior one, davka, because of my phone.

Here is the photo I submitted:
This is the story:
I decided to use a photography option that my Samsung J7 offers. I photographed this pretty flower in the negative. It looked pretty unusual, but just not special enough. 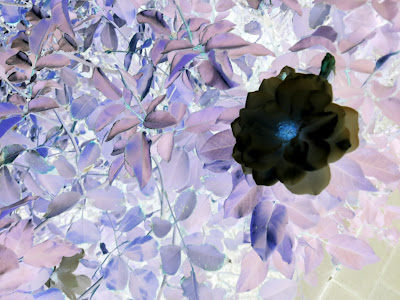 I'm also in a small 52Frames group which is to help each other out with ideas. One of the members of that group suggested that I use Snapseed, a free photo-editing application. So, that's what I did. It lightened the photograph just enough to give more detail and contrast between the flower and the leaves. What do you think?
Posted by Batya at 11/21/2017 09:07:00 AM