Airconditioner Blues, Did We Get A "Lemon?" 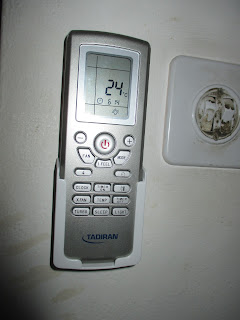 It wasn't that long ago when I, in the voice of Baile Rochel, joyfully reported that we had gone modern and gotten those air-conditioner/heaters.

I just hope that ours isn't a "lemon." A few months ago we had it serviced, since water was coming down onto the couch. And now I called the agent I had used to complain that it's not heating up.

Grrr... I'm not a happy camper. Bli eyin haraa, the smaller bedroom one is doing its job. I started turning it on for an hour or so before going to bed, so the room will heat up a bit. I hardly used it in the summer, since my bedroom is pretty cool and shaded, especially since the neighbors put up an industrial kitchen next door that blocks the sun.