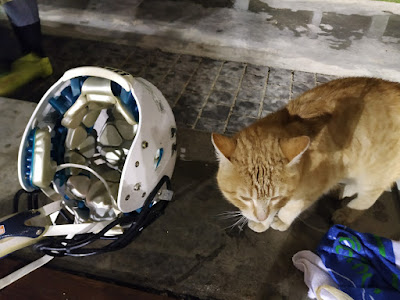 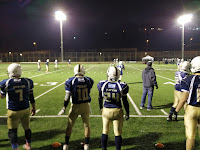 I was one of the first fans to show even before the Jerusalem "Big Blue" Lions game against Ramat Hasharon Hammers began. There was one new Lions fan there before me, this gorgeous, humongous red tabby, male. I had never seen him there before. He reminded me of the red tabby we used to have, a female who was very fertile when we didn't give her birth control pills. Could this one be a descendant? Her kittens ended up all over.

By the end of the game, the stands were full of fans, mostly for the Jerusalem "Big Blue" Lions, some were just curious Israelis who wanted to see "real American tackle football," and of course there were some Ramat Hasharon Hammers fans.

Last night I did not take the bus and walk from "Tzomet Bar Ilan." One of the players, who's a neighbor, gave me a ride, and a different player dropped me off in Shiloh. But I still got in lots of "steps" following the game. It has become one of my favorite fitness pass-times. A bonus is talking to the fans and friends and family of the players. I love being able to answer "Who do you have on the team?" with "My son is the Head Coach."

As you can see from the scoreboard below, the Jerusalem "Big Blue" Lions won the game 48:18. Gd willing we'll continue winning, another championship IFL season. 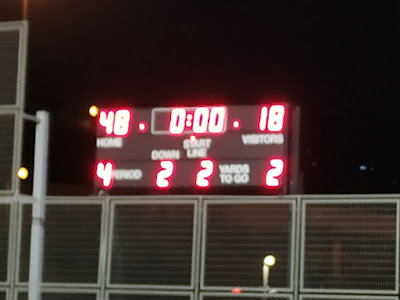