In my Girl Scout days, I even had a "campfire badge." I don't know if Girl Scouts still do things like that. I also had a "tree badge," for which I had to recognize the leaves and barks of about ten trees. I learned these crucial skills at the Girl Scout Day Camp in Cunningham Park, Queens.

Well, for the "campfire badge" we learned how to build a campfire. There were three standard designs: teepee, log cabin and ? Forgive me for forgetting the third. Well, after asking for a while, I discovered only two standard shapes. I guess this Israeli style could be called the third: 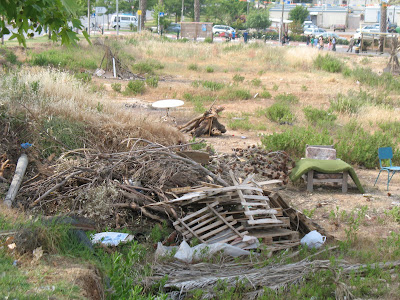 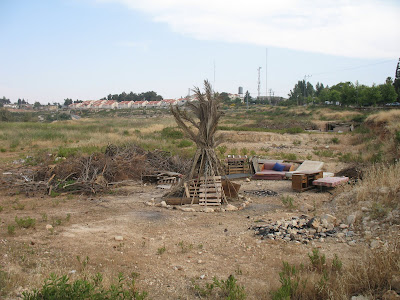 These pictures were photographed by me at the entrance of Beit El. The kids there have been getting ready for their Lag B'Omer campfires since Passover.
Davka, the article I linked to about Lag B'Omer was written by Rabbi Pinchas Stolper, former head of NCSY, the organization which taught me about Torah Judaism. And the very first NCSY activity I attended was a Lag B'Omer trip to Bear Mountain State Park, NY, in 1963.
Posted by Batya at 5/22/2008 07:09:00 AM

I was a girl scout too. We had badges when we were brownies but they had disappeared when I moved up to girl scouts. However, years later, when I was a leader in both England and Scotland all age groups seemed to have kept the badges.
I suppose it depends where you are.

Interesting.
Actually, I think the badges were a good educational idea.

They certainly were. and the kids loved trying to get them. I fear some "educator" had felt they encouraged too much competition...

A little competition is fine; it's the impetus to try harder, and there were so many badges, for all interests and talents.