I really shouldn't complain. The digital scale I bought about six years ago when I started a diet support group worked well until a couple of months ago. Then I had to jiggle it a bit to see my wight. And then nothing worked. The scale was dead. I figured that it must be the battery. The very same battery had worked for almost six years. I turned the scale over and saw that it would need one of those round batteries. 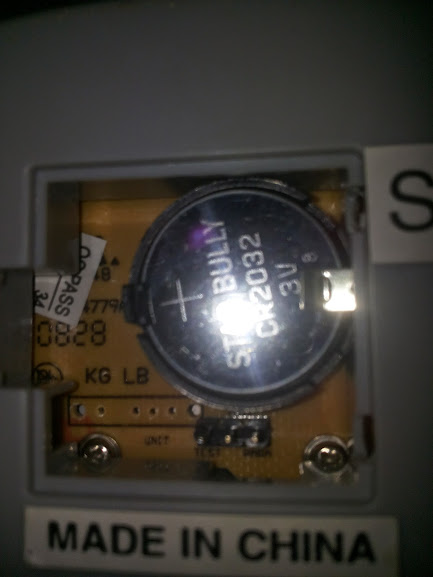 I had never had to deal with any of them before. I didn't know what they were called. So, as you can see, I photographed it, in situ, yes, without touching it.

It took me another week or more to finally go battery shopping. I went to the local grocers where you can get pretty much anything but fresh fruits, vegetables and meat/poultry. Those departments are in the freezer section.

I knew they had batteries of all sorts, since I even got some for my father's hearing-aids when he lived with us.

So the other day I walked into the grocers. There was a kid working there. I whipped out my phone and showed him the picture of the battery:

So, I walked over and found these cardboard battery packs perforated so you can buy just one. The code was the same as in the photo. I ripped one off and went to pay.

When I got home I prepared for the "replacement operation." I turned the scale over and put it on a chair, then opened the battery spot. That went fine, except that I just couldn't get the battery out. I didn't want to break anything. Finally I gave up and called a neighbor. He came armed with some tools and managed to pry the battery out. Then I replaced it with the new one. I put the scale on the floor and hopped on, saw numbers and hopped off. It was live!

The next morning I rather nervously stepped on after my shower, terrified that many kilo had sneaked on me while the scale was out of commission. Thank G-d, pretty much the same as before. That's a relief.
Posted by Batya at 2/03/2015 06:00:00 AM