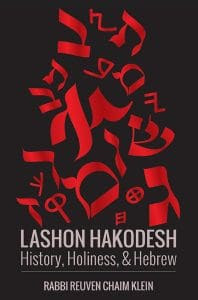 Hebrew is a very unique language, and if you want to know more about it and its history and holiness, then Lashon HaKodesh: History, Holiness, & Hebrew  by Reuven Chaim Klein, Mosaica Press, is the book for you!

Rabbi Klein has put together an amazingly deep, well-researched book about Hebrew. Hebrew is like no other language. Any combination of letters means something, and the history of the language, linguistics and usage are all covered in his book.


Throughout Jewish literature, the Hebrew language is referred to as Lashon HaKodesh. Its history, origins, decline, and rebirth are simply fascinating. Furthermore, at its deepest level, Lashon HaKodesh is called such ( the Holy Language ) because it is intrinsically sacred and is thus unlike any other language known to Man. Lashon HaKodesh: History, Holiness, & Hebrew seeks to understand the holiness of Lashon HaKodesh, follows its history, and focuses on the significance of Aramaic and other Jewish languages such as Yiddish and Ladino. An extended section is devoted to Modern Hebrew, its controversies, and its implications from a religious perspective. This unique work delves into the linguistic history of each Jewish language , as well as the philological, Kabbalistic, and Halachic approaches to this topic taken by various Rabbinic figures through the ages. The author also compares and contrasts traditional Jewish views to those of modern-day academia, offering proofs and difficulties to both approaches. As the old saying goes, Two Jews, three opinions. In almost every chapter, more than one way of looking at the matter at hand is presented. In some cases, the differing opinions can be harmonized, but ultimately many matters remain subject to dispute. Hopefully, the mere knowledge of these sources will whet the reader s intellectual curiosity to learn more. Written by a brilliant young scholar, Lashon HaKodesh: History, Holiness, & Hebrew is ground-breaking, intriguing, and remarkable. (Amazon)

Learn about Biblical mentions of Hebrew and Biblical figures refered to as "עברי" "Ivri," "Hebrew." Of course Klein mentions the Biblical Tower of Babel, when G-d punishes everyone by taking away common language. He gives us a number of Midrashim  which explain the role of Hebrew in the story.

The section I found most interesting with ramifications until today concern the use of Modern Hebrew here in the HolyLand from the early Zionists and before. It disturbs me greatly to see how Ashekenaz (European) Jews, whether Torah observant or not, ignored the fact that there were many, many G-d fearing Jews in other parts of the world. The fact that Yiddish was proposed by quite a few as the official of Jews here in the Land of Israel discriminated against Jews who came from areas where it wasn't used at all. And Klein wrote about the great Ashkenaz rabbis who consider the Sefardic (North African) pronunciation to be spiritually inferior to the Ashkenazic also treats Sefardim as inferiors. I am happy that we have the Hebrew of today and pray that it will unite us.

It's not the book, it's the rabbis quoted and referenced. I must check what I wrote to make sure I'm clear. Sorry.

Congratulations! This post has been selected as one of the finest of the Jewish world this week in Haveil Havalim, the Yikes-it's-Yitro edition, over at Adventures in AliyahLand.

Seems history has been systematically whitewashed !