Book Review: Growing with my Cousin by Ester Katz Silvers 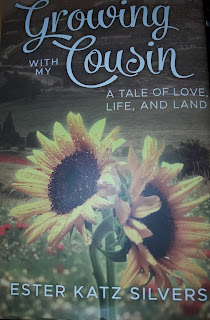 I had been looking forward to reading Growing with my Cousin by Ester Katz Silvers, for a long time. Silvers is my neighbor, and I had known there was a book on the way. From what I understand, getting a book written, edited and published can be quite a long "pregnancy." As soon as I received the review copy, I began to read it and had trouble putting it down.

Growing with my Cousin is fiction based on facts. There are recognizable similarities between Sondra, the main character, and Silvers. And in some ways the fictional yishuv, Jewish community in Samaria, is like Shiloh. Most of the book actually takes place in Phoenix Arizona, where Silvers and her husband had lived before making aliyah, moving to Israel. I'm also familiar with the Jewish community there, since my parents lived there in their final years. The Orthodox community graciously put me up for Shabbatot quite a few times. One of the families I had become close with moved to a different city with more Jewish opportunities for their children just like some of the characters in Growing with my Cousin.

You can say that Growing with my Cousin gives both a macro and micro account. On one hand, we get to know the individual characters very well. They are totally believable, and it is easy to care about them. On the other hand, we learn about life in a small, but dedicated, Jewish community, one that tries to offer all an Orthodox Jew would need. It's a difficult situation, because most people are "in transit" and don't stay in Phoenix all that long.

Sondra and her Cousin Lisa dream of moving to Israel, but it's not all simple.


Sondra seems like the stronger one. She's older and became religious much earlier.
Yet don't underestimate her beloved cousin, Lisa. When Lisa commits to something - whether Judaism, Israel, or a husband who mysteriously disappeared - she doesn't give up easily.
In Growing With My Cousin, readers are invited into the deep, emotional and fascinating relationship and lives of Sondra, Lisa, and their families.
From Kansas to Phoenix to the Land of Israel, this gripping novel covers Jewish and human experiences common to us all.
From grandparents to grandchildren, this moving story connects the past, present and future.

I highly recommend Growing with my Cousin for readers of all ages. Silvers includes a glossary at the end of the book, so that even those not familiar with Jewish life will have no problems understanding Hebrew terminology. I particularly liked how Silvers shows the wonderful community spirit, willingness to help others that exists in Jewish communities in Israel and abroad. Sometimes we contribute, and sometimes we are on the receiving end.