Yesterday was a fast day on the Jewish Calendar, the postponed 17th of Tamuz, which commemorates the beginning of the loss of Jerusalem and destruction of the Holy Temples. It's a daylong/light fast, beginning with the first light of dawn and ending in darkness. Being that (in the northern hemisphere) we're in early summer, when day's are longest, it feels like it goes on forever, and we finally eat after my usual dinner time. I like to break fasts on vegetable soup. And I enjoy spending the last few hours of a fast puttering in the kitchen preparing homemade vegetable soup. 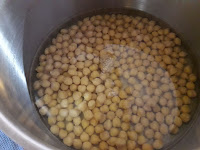 Before I left for a morning's learning in Matan, Jerusalem, I left some chickpeas to soak in boiling water for the soup. Chickpeas take a long time to prepare, unlike lentils. But I figured that the day would be long enough for the chickpeas to soften.

A few hours before the fast ended, I decided it was time to go to the kitchen and turn the chickpeas into a soup. My soups are never the same. I don't measure, and I rarely plan. 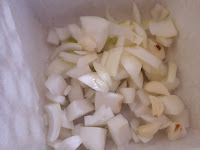 Since I knew there was plenty of pumpkin and sweet potatoes in the fridge, I decided to base my soup on those ingredients. In Israel it's very popular to make an Orange Soup, which then gets blended into a creamy sweet soup. But I don't have one of those blender sticks, and I davka like to chew... 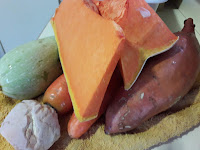 Next I took out the pumpkin, sweet potato, carrots, squash and some ginger root, which I store in the freezer.

I cut up all the ingredients and added them, too. Now, I do have a system when it comes to cooking different sorts of vegetables together. There is a big difference in cooking times between carrots and pumpkin, for instance. Carrots take the longest to cook, so they go in first. After that the sweet potato, squash, ginger and pumpkin. 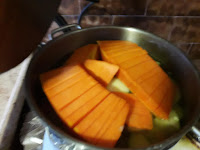 I added some vegetable oil and boiling water, covered and then lowered the heat to a simmer. Once I could see that the vegetables had begun to soften I added a bit of coarsely ground pepper and some coarse salt. That was it.

The soup cooked for about 40 minutes. And then I left it to finish by itself, no flame. It was absolutely delicious, very sweet, not savory. 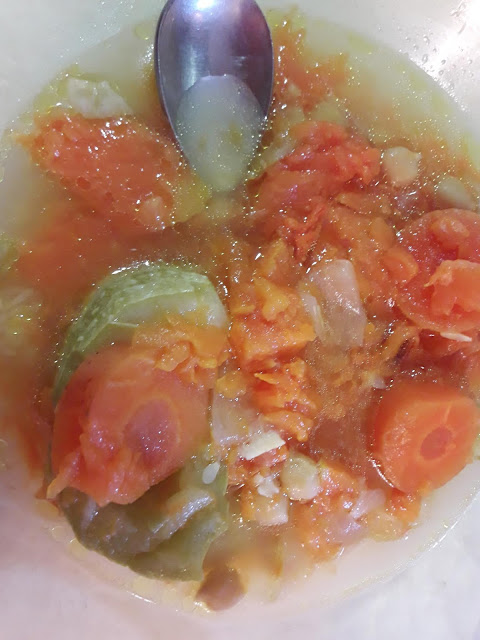 Batya, thanks for the recipe. I usually soak raw chic peas for 2 days and then steam them to preferred softness. However, may I suggest that using olive oil is much much healthier than vegetable oil (which contains NO vegetables at all) and is actually detrimental to the body. I only use Olive, Avocado, or Coconut oil (depending on the type of recipe) which is much much healthier and recommended by Dr. Perlmutter, the Empowering Neurologist, and expert on all things neurological and nutritional. drperlmutter.com.

Veggie oils actually contribute to ‘inflammation’: Inflammation Today Means Brain Shrinkage Tomorrow. You would be amazed at the wealth of info to be learned at his website.

PS I also talk about food and other things HERE

I was as unspecific as possible about the oil. A spoon of oil in a pot of soup really doesn't make a difference. I prefer stressing the fresh vegetables and no soup powder.

Even more importantly, Dr perlmutter is a quack.. About three minutes of research into him will reveal that.

Thanks for the info, no surprise.