Like many Israeli suburban locations, our regional council thinks the way to our hearts/votes is with new sidewalks. We would have really preferred they return the bush shelters they replaced with holey tin cans.

Instead they have made our lives difficult, not only ripping out perfectly good sidewalks, but adding another to the other side of the street, which has narrowed the street. Many bus drivers have gotten stuck and refuse to drive by the house. They go a different way, which leaves waiting passengers in the lurch.

Besides that, there's the dirt and dust, and I almost broke my leg the other night. I hadn't realized that the sidewalk nearby had been ripped out, and I stepped into a mess in the dark.

And then yesterday, just as I was about to leave the house for Jerusalem, I tried to wash my hands and discovered that we had no water. I had heard the tractor at the front of my house, and had an awful feeling about it. I ran out and discovered that it had broken the water pipe to, davka, my house. 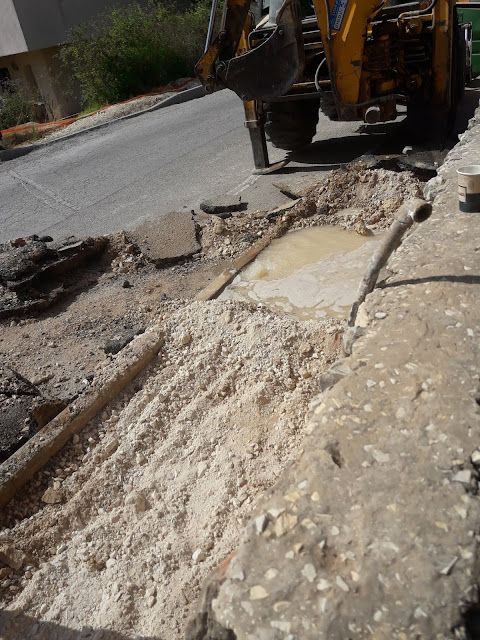 I ran back in and called the "municipal authorities." Thank Gd they were able to quickly send a plumber to make a temporary repair. If I hadn't been home, I never would have known about it to be honest. That is except for the mess in the yard...

Never dull, for sure.

When people are battling serious illness, I'm not going to get hyper hysterical over inconveniences. Please pray for a refuah shleimah, complete recovery for:
Miriam bat Chaya
Leeba Asnah bat Sara
Posted by Batya at 7/27/2018 07:06:00 AM