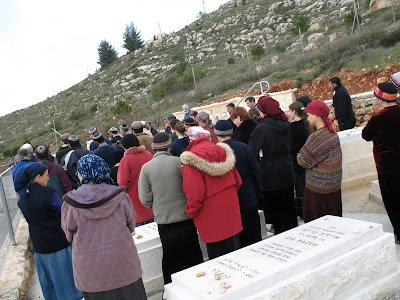 Yes, again we buried an old woman in the Shiloh Cemetery on a Friday morning.
Sixteen years ago, when the aliyah from Russia was reaching numbers beyond our wildest dreams, Shiloh invited olim to visit. We really didn't think of it as "recruitment" to bring more permanent residents, since hardly any of the olim, immigrants, were religiously observant, and Shiloh is a religious community.
I was on the Vaadat Klita, Absorption Committee, at the time, and we were surprised when a three generation clan contacted us that they wanted to move here. Their Shabbat as guests was a taste of Gan Eden, and they knew that Shiloh was the place for them. We were surprised to say the least, but after careful discussion and consultations, it was decided that we would accept any of the Russian Jewish olim who wanted to come, as long as they understood what type of community Shiloh is. The minimum from them was public observance of Shabbat.
The three generations of this clan enthusiastically embraced the opportunity to live as Torah-observant Jews. There were the elderly grandparents, Gretta, their daughter, and her daughter plus husband.
Within a few years, they all bought homes, and a fourth generation was born to the young couple. A number of other Soviet immigrants moved to Shiloh, many bought homes are live here happily.
"Savta Lyda" had been a pediatrician for forty years in the USSR, and she loved children. She also loved to dance, which she did at all of the festive occasions she attended. Neighbors who hosted Savat Lyda and Sabba Leib on Shabbat tell of how, even if she had been brought in a wheel chair, she would get out of it to sing and dance.
It was very hard to see that once dancing woman being buried, davka on the Eve of Purim. She danced her last.
Baruch Dayan Ha'emet
HaMakom Y'Nachem...
May G-d Comfort the Mourners...
Posted by Batya at 3/03/2007 08:10:00 PM

Hi! Please grab anti-Olmert's Purim buttons from http://samsonblinded.org/blog/purim_banners.htm
The buttons are free and could be hotlinked. Let's make some fun of Olmert!

Thanks, bn, she was, as is the whole clan.
Purim Sameach