For the past couple of weeks I've been trying to schedule a meeting between me and two other people.  Every time we set a date, somebody cancels it. The first time was my fault, and since then it has only gotten worse. 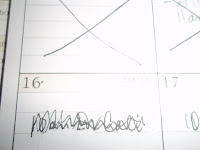 My week has very few set "events."  Work is very flexible in that I never promised any set shifts and they never promised me anything either.  Sometimes I get more and sometimes less or none.  I wanted a part-time job that wouldn't prevent me from attending weddings and other joyous occasions.  And they like the fact that I can usually work when others can't.

I also study once a week, and that isn't flexible.  I try to see the grandkids once a week, too.  There is some flexibility there.

And I have other "projects" and "commitments."  Some are flexible and others aren't.

What's annoying is that the people I'm supposed to meet up with  -and I really want it to be f2f- also have flexibility in their schedules.  They don't know each other, and I think they should and I want to be there to facilitate the meeting so we can combine forces.