Generally, Americans like to think that life is so much easier in the United States of America.  When my husband and I, as a newly wed couple, made aliyah to Israel in 1970, the feeling and reality was that we were going back in time.  Most Israelis were then getting their first modern refrigerator, first auto-rinse washing machine and first proper ovens.  Many didn't have private phones and if they had phones, they had waited for a number of years.  When we applied for our first phone, there was still an option to get a "party-line," which would cut down on wait time.

But now, more than forty years down the road, there's no real difference.  Israelis are more gadget and tech-crazy than Americans.  Cell phones were considered a necessity here before in the states.

Living a rather rural life here in Shiloh, I've had to do without water and electricity on occasion.  For my American family and friends, this was considered the height of insanity and primitive conditions.  But things have changed as storms annually ravage Long Island, NY, my old hometown.  I wonder if the people who now own my parents' old home have electricity and if the house and street are safe. 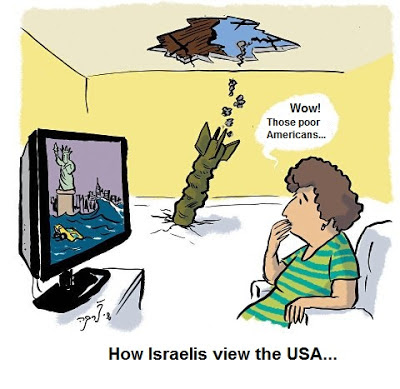 I'm used to getting help from my neighbors, such as the last couple of weeks, when we didn't have a functioning washing machine.  This notice I read in the Long Island Herald about showers being available for those without hot water made me smile:


For residents still suffering from power outages, shower facilities will be available at the Nassau County Aquatic Center at Eisenhower Park in East Meadow.
The facility will be open for residents from 8 a.m to 11 p.m. beginning Saturday, and will open each day until further notice.

It's nice, but considering the gas shortage, I hope people can arrive safely.  Long Island living is based on having a a drivable car or two or more.


I guess the message is that nobody is immune, and we have to learn that all the modern conveniences we consider as necessary can just disappear.