Back to EFL Remedial Teaching: Better Than Ever! 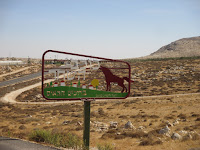 I really can't believe it. Yes, I am overwhelmed by how well I'm doing back in what's considered one of the most difficult teaching "specialties." My students aren't retarded; it's not a school for that sort of "special education." The students in Yeshiva Tichonit (High School) Ahavat Chaim are average and above average intelligence, but they have various issues and learning problems, like dyslexia, dysgraphia etc. My sons both studied there and are grateful that I discovered the school when it was in its infancy, when nobody including my older son's 8th Grade Guidance Counselor.

Just like when I first began as an English Teacher close to twenty years ago, this year, too, I was asked to take the very weakest students in the 9th and 11th Grades. Then I hadn't a clue as what to do, but this time, after a very long break from teaching, I discovered that my reputation was still excellent, even though I hadn't left under the best of circumstances.

I accepted the offer, because I really wanted to leave Yafiz, the clothing store where I had worked for almost six years. The night shifts which had become my regular "gig" were just too late for me, and the store manager said that her bosses had insisted that was my main shift. I'd get so hyper in order to work well, that I'd fall asleep very late. Also, there is no salary raise or extra bonus for veteran workers. A seventeen year old high school student got exactly the same salary. But I really loved the job. It was fun seeing lots of old friends, former students etc. 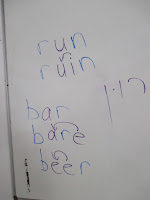 It was pretty traumatic getting back in the classroom, and I still haven't gotten my salary stuff taken care of. The Education Ministry insists I never existed, have no file, and my degrees aren't any good. My students started off as students in name only, and I had to use a form of threat/bribery to get them to bring even a pencil to class. With the agreement of the Principal, I was able to make a rule that anyone who shows up without minimal writing implements and book is considered "absent."

Luckily they hadn't yet been assigned textbooks, so I started off checking their levels and teaching by my own methods. For the 9th Grade I did find a good book, UPP's Entry Point 2, which they got after I taught them to read all of the letters, but the 11th grade ended up on too low a level for the simple A Bagrut prep books I offered them. So, began giving them much easier work, and they are having fun and working hard. 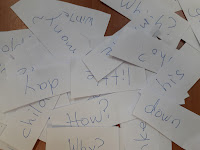 My biggest challenge was keeping their attention during the last lesson of the week. The principal told me to "play games." Honestly, I was never a "game person." I hadn't a clue of what to do with them. But I've always been creative, so I asked for ideas and made up games.

They taken turns pulling out from a bag either a word, or letter, depending on what I've prepared, and then they have to read and translate if it's a word, or say a word that has the letter.  If they don't know the answer, someone else gets a chance and the paper. The one who has the most when we finish gets a bigger prize, but they really don't care and just have fun. And I've discovered that these games are the best reviews, better than a quiz, and the kids are overjoyed at getting a couple of inexpensive candies.

I'm not surprised you are succeeding and enjoying the work Batya. You are not only highly intelligent-- you are flexible, very creative and extremely thoughtful. As I said before you began the actual teaching, they are lucky to have you. BRAVO my dear! I had no doubt you'd succeed beautifully!!! Keep up the good work!

Thanks for the kind words and encouragement.