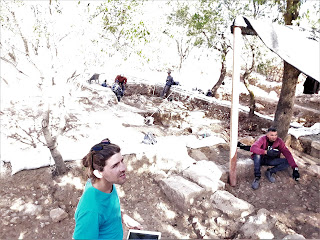 On Rosh Chodesh, when my friends and I were walking from the entrance, coffee/souvenir shop to the site of the Mishkan, Tabernacle for prayers, we noticed a new, active section being dug by archaeologists.  We stopped by to chat with the archaeologist in charge, and he pointed to a stunning piece they had just dug up, the base of a pillar, with exquisitely detailed carvings. I tried hard to photograph it, but then was told that it wasn't to be publicized yet.

Then we continued on our way, prayed together, and then each of us continued our day.


It's believed that the pillar was part of a Byzantine church, the 6th discovered at Tel Shiloh. And one must remember that many holy sites to Judaism, like the Biblical Shiloh, were later adopted by other religions. We, the Jewish People, were in Shiloh before them and after them, too.

This is the perfect message and reminder as we Israelis and Jews celebrate seventy 70 years of modern statehood. We have returned to our Ancestral Homeland, the Land of Israel, the Land of the Bible, our Jewish Bible, the Tanach.

No other people ever had an independent country here, just the Jewish People.

It's a capital, not a base. But it's a remadkable find nevertheless.

Thanks, it's really stunning.

Do they know if these churches were all in use at the same time, or when one fell into disuse, a new one was built? 6 seems like there was a HUGE amount of people coming!

Devo, good question. Very little archaeological finds have been of Christians in Shiloh to my knowledge. There was a vineyard and wine production to the west of the tel. Monasteries but not regular communities and not for very long. It's possible that various christian sects built their own churches, sort of like staking flags.