A Nice Meal Out With My "Study Group" Friends

I'm part of a group of five who study the Matan TaNaCh Bible Course, Al HaPerek together.  This is the third year of the course, and our group changes a bit from year to year.  Some of us have been together studying from the beginning and others joined last year and this one, too.  What's really a bonus is that all but one of the group have been friends of mine for many, many years, but they hadn't known each other.  And now we are all friends, united by our love of the Bible.

One day last week we met up for dinner before going to a shiur, class in Matan on the book we're now studying, Yermiyahu, Jeremiah.  One of the group chose to eat at Masaryk, one of the dairy restaurants on Emek Refa'im Street, Jerusalem.

A couple of us started with their "orange soup," a very popular vegetable soup made with orange vegetables, such as carrots, pumpkin and sweet potato.  Everyone makes it slightly differently, of course, and theirs was delicious.

One friend had their quiche, (I don't remember which filling.)  It came with a salad, and she said that it was a good meal.  We all had different main courses, and nobody had any complaints.

I ordered one of their salads.  I think they called it their "antipasti salad."  It had grilled and fresh vegetables topped with that cheese restaurants serve too often for my taste.  I would have had been happier with more salad and less cheese, but it did taste good.

We had no complaints.  The service and food were fine.  And those who ate the bread were happy they did; it tasted that good.  I was glad that I had the self-control to stay away from the bread.  I felt fully satisfied after the soup and salad.
Posted by Batya at 1/19/2013 08:38:00 PM

Proud to part of the study group! The quiche was mushroom. Have a great trip! 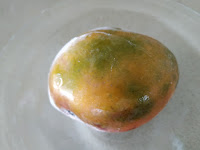