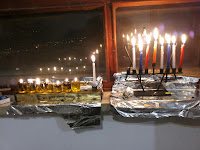 I guess my Chanuka series is a bit off, since I blog in the morning and tell about the day before. This post is called "," but it's really more about the Sixth Day of Chanukah, not the Seventh. I hope that slight inaccuracy doesn't really bother anyone. 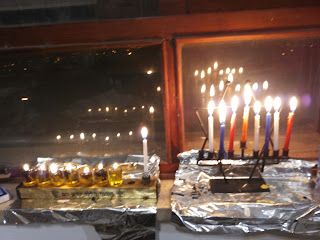 The 6th and 7th days of Chanukah are both Rosh Chodesh (beginning of the Jewish Month.) That makes all of the prayers much longer than usual, record-breaking long actually. There are extra prayers added for both Rosh Chodesh and Chanukah. There was a rousing Hallel said/sang in our synagogue, but less was done as song than we do at the Women's Rosh Chodesh Prayers at Shiloh Hakeduma, Tel Shiloh.  Regardless, we ended late enough. In a couple of hours, rain or shine, I'll be going to doven at the site of the Ancient Biblical Mishkan, Tabernacle at Tel Shiloh, Gd willing.

We had a quiet Shabbat, my husband and I, for a change, no guests and no invitations to eat at neighbors. I had started inviting people, but everyone had other plans, so I gave up. That's one of the reasons I decided to go for the turkey I had bought about Thanksgiving time. No, it isn't/wasn't a whole turkey or even a half. I bought four turkey drumsticks. There's a lot of meat on them, so it doesn't pay to serve for guests who frequently don't finish them. Each is a serving as far as I'm concerned. I decided to cook up two of them as a "one pot meal" in a "bake and serve" dish. 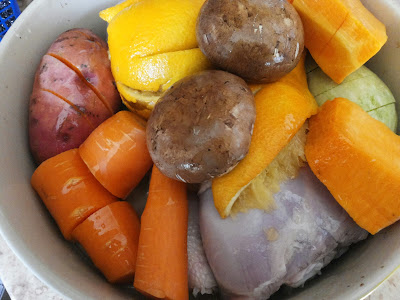 Nobody could really call this a traditional Thanksgiving recipe, but it's as close as we got to one. In a large round baking dish I placed:


I covered it all with aluminum foil; you can also bake this in a pan that has a cover. And then I baked it at a high heat until I was sure that the turkey was safely cooked.

This Not Your Thanksgiving Turkey Dish was moist and tasty. I served it with a large salad and some more vegetables, a Cauliflower and Carrot dish. My husband had rice, too. I drank some beer and he had wine; he also started with his chicken soup.

You don't have to use the exact vegetables and fruit that I did. If you're using frozen vegetables, add them when the turkey is almost fully cooked, or they will be an unappetizing and unhealthy mush. Please let me know if you try this recipe and whatever changes you've made, thanks.

*The vegetables are all cut in in big pieces so they won't overcook and become a mush. The turkey takes longer to cook than vegetables.
Posted by Batya at 12/13/2015 07:28:00 AM