For decades, I've broken fasts on vegetable soups. My kids remember them, too. I'm not quite sure when I started cooking them, but now it's automatic. So on Tuesday, while fasting to commemorate the Tenth of Tevet, I took a bunch of brown lentils, checked them first bit by bit on a white plate to make sure there were no stones or worse, and then I put them in a large pot, added boiling water, covered and let them sit. 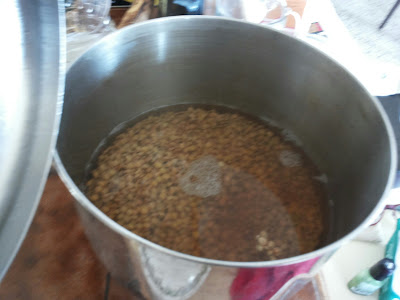 I started a good few hours before the fast was to end, so the final cooking with vegetables shouldn't take long. When I checked softness and wasn't satisfied, I added more boiling water and boiled them on the stove a short time. After again letting it sit, I could easily see that they were soft and ready.

Then a couple of hours before I wanted to serve the soup, meaning break the fast, I added cut up:


I boiled, then simmered it on the stove. And then I added cut up sweet potato and some dehydrated parsley. Salt and pepper were added close to the end of cooking. About a half hour before serving I turned it off, and then when it was time to eat, we had a feast. 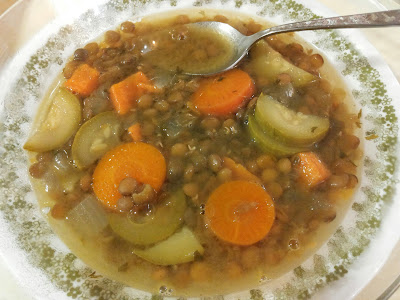 All I needed to fill me up after fasting was this soup, bowl after bowl. The lentils tasted like honey especially with the small chunks of sweet potato.
Posted by Batya at 12/25/2015 05:41:00 AM