Pishers' Guide to Jerusalem #7 A Supermarket to Avoid. Plus WC Tips

For those of us who really need and use public toilets, you should know that there are some in supermarkets. In general I've had some excellent experiences in them. At work in Sha'ar Binyamin, the nearby one is in Rami Levy, which I, bli neder*, must review. On occasion, there may be a mess, but the store's cleaning crew keeps it clean and well stocked with toilet paper. I've also been to a couple of Super Sol branches, which were perfectly acceptable.

That's why I had absolutely no trepidations entering the former Super Sol in the Ramat Eshkol Shopping Center. This is one of Israel's very first purpose built shopping centers, designed after the 1967 Six Days War for the Ramat Eshkol neighborhood, which had many western immigrants. There are very few public toilet options there. I've never tried the gas station, and small stores and restaurants generally restrict access to patrons. So, since I needed the facilities, and the supermarket was the first option on my route, I went in. It's now called יש Yesh. 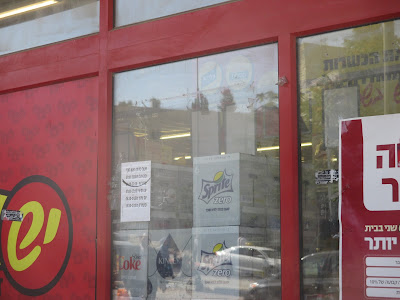 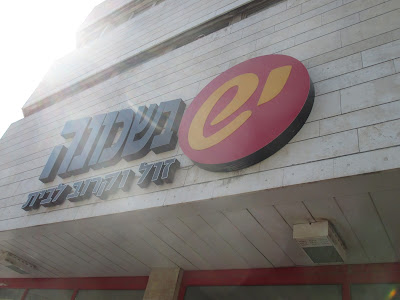 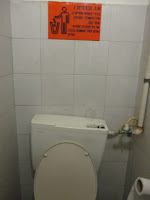 I walked in headed left, looking for signs along the walls and finally followed them into a storage area. A worker gave me directions. I needed to go up a few stairs and make a couple of turns. The further I went, the worse the place looked and smelled. If you have a good nose, you can probably find it by the scent. I certainly wasn't expecting that. My Rami Levy branch is cleaned and washed frequently. And of course the Yesh WC isn't handicapped accessible. 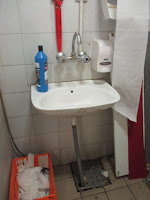 When I was planning this post, I thought of writing that the toilet hadn't been renovated since Super Sol opened the building in 1970-71, but it isn't technically true. I can see that the toilet itself has been replaced since then. It's a model that didn't exist forty-five years ago.

But the whole set-up there is awful. I'd have to be very, very desperate to avail myself on those facilities again. Within five minutes I could have walked to the Kupat Cholim, sick fund, clinic across the way and down the street. All sick fund clinics in Israel are supposed to have public toilets. Nobody has ever requested a membership card from me as a condition of use. And there's also the gas station... but I usually avoid them. Maybe it's time to overcome that phobia...