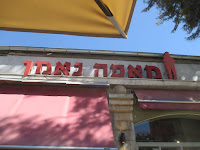 Depending on how long one has known Jerusalem, the store/spot/location on the corner of Jaffa Street and King George has different identities. For me, and many other old-timers, it's the Weill Shoe Store where I'd bought numerous pairs of shoes for myself until the old couple decided to retire and close it. 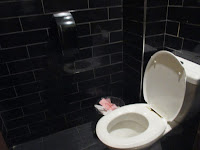 For many others, the horrific Arab terrorist attack on Sbarro restaurant, which had taken over the convenient and central Jerusalem location, quickly erased the Weill couple from their collective memories. After that, Sbarro, hoping for better luck, moved their shop down the street and then ended up closing their Jerusalem operations. The large Neeman Bakery chain took over the iconic location, and I've bought many sandwiches and salads there, since the prices are relatively good. I davka went there this week, since the nearby "Coney Island*" was closed. 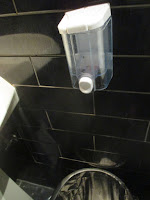 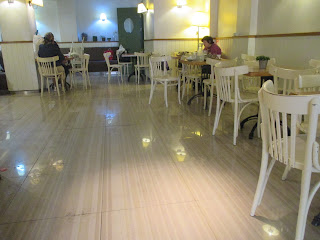 I must admit that I've been to the WC in that Cafe Neeman many times and never found it satisfactory. But this week it was so awful that I fled. The urine smell was powerful, and not for the first time did I wonder how people could eat a meal in that upper area right next to it.

I did search for another place to buy my salad, but there was nothing else for NS25 or less. It bothered me to buy food in a place that didn't have soap in the WC. So, if I get some sort of food poisoning in the next couple of days...

I am familiar with that place and their sherutim. Ugh is an understatement. When I am in need of bathrooms while out and about in the center of town, I go to Binyanei HaUma. I think it is the 6th floor up by elevator and there are decent bathrooms. Not great but better than what you described. I have also used the public toilets near Mike's Place...fine. Most restaurants in town will let you use their sherutim if you ask nicely. The one inside of Mike's Place is fine. There are also the toilets in the little park on King George St, just past Rechov Hillel. I have found them to be maintained well enough to use. None are great, but they are usable...

Binyanei Hauma is far. I had no idea about the 6th floor. I reviewed the new ones near Mike's Place, and I ended up at the one across from Hillel St.

Best of all is going to a hotel - tho you have to pass the guards, but once they hear your accent, it's fine. Just say going to meet a guest.

You beat me to the punch - I once had dreams of writing a ratings book on bathrooms.

Hotels are getting harder to enter. I used to go to the King David way back when...
Nu, so do you have any suggestions?

Prima Kings is pretty easy to enter. For me, I also have my insurance agent is on a side street just off of Ben Yehuda. I can always go there if I need to.

The Sha'arei ha-Ir building between the Central Bus Station and JCS hss good restrooms. You have to go up a floor or so but they're fine.

Rachel and Rahel, thanks for the suggestions.

Ok , my secret WC that I am sharing with the whole world. On Yoel Solomon St, between the Music Museum and shop there is a passageway to Puccolino. Go downstairs. Don't need to go through rest

Really, I must check that out. Near Piccolino? Thanks

Thanks, I had forgotten about that one.