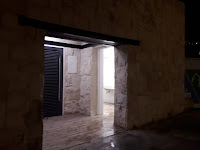 It sure pays to complain. Or am I taking too much credit? As regular readers know, I attend football games in the new Kraft Stadium near Ramot to cheer for the Jerusalem "Big Blue" Lions.  The first time I needed to use the WC, 00 aka Public Toilet, there I discovered that there was just one open, for the men. Now I don't mind going to "mixed facilities," like in the First Station, but when there are urinals, they are obviously MEN ONLY.

After a sympathetic ref made sure it was clear of men, a few women took over guarding it, so we could all have a turn. The men who needed graciously volunteered to "use the wall" in the back. I sent a message of complaint about the lack of a "ladies room" to IFL officials, and asked others to do the same. Besides the female spectators, there are female referees, physiotherapists and photographers at the games on official business. 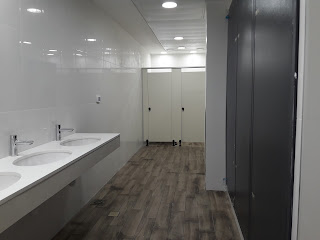 So, at the next game, with great trepidation I approached the little WC building and discovered that they had unlocked the door to the room on far left, also. The lights were on, and it looked large and impressive. OK, there wasn't any toilet paper, nor did I notice soap, but the locks seemed to work as did the water faucets. As I've said before, it is important to always come prepared.

There also weren't any signs on the door indicating male, female... 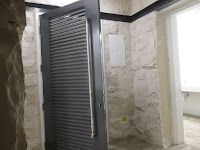 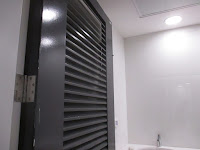