Feed The Body Not The Flu

As you may know, I'm at war against a flu which managed to breach the barricades of the flu vaccine. Thank Gd I don't have the worst possible case, but for me, it's bad enough. Cough and chills and difficulties concentrating are bad enough. Even before I had realized I was sick, my walking speed was reduced. The flu rather slowly reached its peak making me think that I wasn't really sick. And then as things got more uncomfortable I'd think:


"That's it. Now I should start feeling better."

But instead of feeling better, I felt worse. I even went to the doctor. But by then, as she pointed out, I was finally on the road to recovery. I should just be patient, not force myself to do anything, including eating. Of course, she doesn't know me well enough to know that "resting" is something I have to force myself to do.  My most "restful" activity is playing cards on the computer. At this point reading is a bit stressful to the eyes, but once I recover a bit more... And those movies I love to watch are usually just background sounds and pictures when I'm cooking and cleaning.

Today I didn't even drink coffee. Really! I had my water with lemon and a bit of fresh ginger, but since I didn't enjoy yesterday's coffee and threw out most of it, I didn't make any this morning. 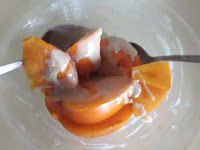 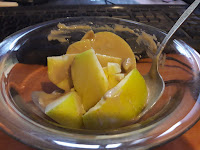 Another change I made was to have a vegan breakfast. I mixed sesame paste with fruit, rather than using goat yogurt or sour cream. First I had it with apple and ginger and then with a persimmon. Both were totally delicious.

For whatever reason, I still have a good appetite in the morning, especially for these fruit treats/meals. Next on the menu is a vegetable soup. The peas are already soaking in boiling water.  I hope that this helps me get all better quickly, Gd willing.
Posted by Batya at 1/22/2018 09:12:00 AM