Saying "Goodbye" to The Pan 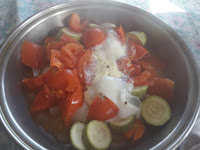 The "Pan" I'm referring to here isn't Peter Pan as played by Mary Martin. The "Pan" is my old trusty covered frying pan, which I'd used for so many years to make everything from fish, vegetables, omelets, potato latkes on Chanuka and more favorite foods. 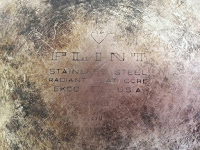 This large frying pan and matching cover were the most used pieces of the set of EKCO pots my late mother-in-law had bought me when I got married. The cover was also used for the large "soup pot" in the set. This EKCO set was for dairy cooking, and I got a similar set for meat cooking but Farberware. I got married in 1970, and I must say that the pots have all survived amazingly well, though many are missing their handles, as are the covers.

Actually, it was because the large cover's handle had become shaky of late that I finally decided to retire them from use. This has been rather traumatic for me, since I cook in it almost daily nowadays. I've been a fan of stainless steel pots and pans "forever." Nowadays they are very hard to find, and if you do, the prices are outrageous. I'd still recommend them for people just starting out. They last a lot longer than most marriages. My kids will be able to divide my old pots up after I reach my 120. They are worth more than most of my jewelry.

I gave in and bought a specially treated aluminum pot with a glass cover. It doesn't claim to be covered with Teflon or silicon, materials I don't like at all. And I sent a note to the local email list that anyone who wants can take my old beloved dairy pan and cover from next to my front door. It's still usable, even as a dairy cake/pie dish, since the plastic handle is ancient history. 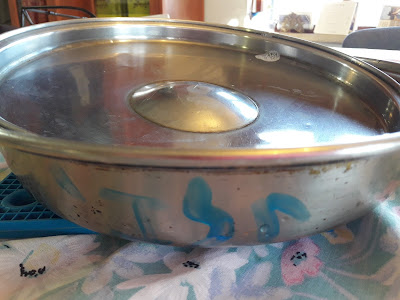 If I had found a good stainless steel replacement, I may have shelled out the money, but I didn't see any. I looked in a number of stores. So far I used the new pan and cover set once and for parve (neither meat nor dairy) cooking. I don't cook dairy for myself anymore. Yes, I'll, bli neder, blog about it, and I'll have to get used to different cooking temperatures.